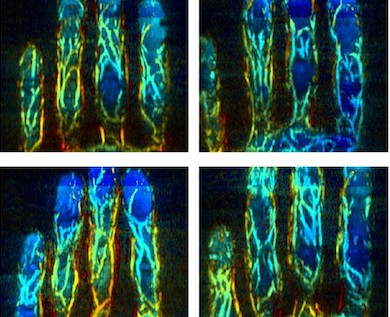 Research into biometric authentication, in which unique anatomical features provide secure recognition of a particular individual, has included the potential use of biophotonics and bioimaging techniques for some time, but the need for increased accuracy has always been an important factor.

A project at SUNY University at Buffalo has now developed a technique using photoacoustic tomography (PAT) to map the precise network of blood vessels in a subject's fingers in 3D. The work was reported in Applied Optics.

The concept of mapping finger veins for ID purposes has been investigated before, based on the relative lack of age- and wear-related degradation of those vessels compared to surface fingerprints. However, until now studies have been limited to 2D imaging, rather than the 3D technique developed at SUNY Buffalo.

"The 3D finger vein biometric authentication method enables levels of specificity and anti-spoofing that were not possible before," said Jun Xia of SUNY Buffalo's Optical and Ultrasonic Imaging Laboratory.

"Since no two people have exactly the same 3D vein pattern, faking a vein biometric authentication would require creating an exact 3D replica of a person’s finger veins, which is basically not possible."

The breakthrough employed PAT, an established bioimaging modality in which ultrasound pressure pulses created when an infrared laser briefly heats tissues of interest can be detected with an ultrasound detector, and turned into a 3D image via a computational algorithm. Blood vessels are a particularly useful target of this technique due to the inherent absorption properties of hemoglobin in red blood cells.

Previous studies at SUNY Buffalo investigated the use of PAT to image blood vessels in the palm of the hand. The team has now built on that research to design a new system, christened 3D Finger, specifically for imaging of finger vasculature, in particular ensuring that regardless of the finger placement and curvature, the acoustic and infrared light beams are always coaxial to each other, eliminating alignment errors.

"Compared to the previous system, we redesigned the light delivery scheme and adjusted the system’s scanning geometry," noted the project in its published paper. "By utilizing a high-performance cold mirror as an acoustic-optical combiner, we achieved co-planar light illumination and acoustic recording, thus significantly improving the system’s robustness and imaging depth."

In trials on 36 volunteers, the platform proved able to produce vascular images from four fingers of both left and right hands and show intricate depth information, especially after computational methods removed extraneous image information relating to the bones and surrounding tissues.

Compared to the prior studies of palm blood vessels and other biometric security methods, the new approach showed an improvement in equal error rate (EER), a biometric security parameter related to the threshold values for false acceptance and false rejection.

According to the project, its EER of below 1.23 percent is superior to the EER of 5.6 percent in 2D vein infrared scanners, 7 percent in assessment of an individual's gait, and 2.5 percent in capacitive hand touchscreens, making it practical to use in real-world scenarios.

The next steps will include efforts to minimize the platform as much as possible, using high-energy LEDs or LED arrays, and increasing the repetition frequency of the illumination, aiming to reduce the imaging time to below 1 second.

Since ultrasound systems are already making their way into smartphones, the new platform could readily be employed in hand-held devices, according to the project.

"We envision this technique being used in critical facilities, such as banks and military bases, that require a high level of security," said team member Giovanni Milione. "With further miniaturization, 3D vein authentication could also be used in personal electronics or be combined with 2D fingerprints for two-factor authentication."