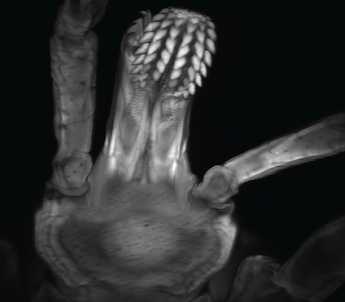 Live and in detail: confocal imaging

Microscopy platforms able to monitor large populations of cells in living specimens are increasingly vital for understanding neuronal activity, but scanning microscope technologies with micron-scale resolution can be slow and produce impractically large amounts of data.

A project at Boston University has developed a novel microscopy technique that could help tackle this problem. Termed Multi-Z confocal microscopy, it can provide two-color fluorescence imaging over fields of view larger than one millimeter, and yield simultaneous multi-plane imaging without axial scanning.

"We found a way to merge the needed imaging features in a microscopy system that is easy to build and operate," said Amaury Badon of Boston University. "It also provides results in real time without the need for complicated data analysis or image processing." The research was published in Optica.

The breakthrough is based on three ideas, according to the project team. The first is to combine high-NA detection with low-NA illumination, the former producing high signal collection efficiency and the latter leading to axially extended illumination over a large range of Z-axis depths.

"The second idea is to detect multiple signals from this extended depth range using multiple 300-micron confocal pinholes, each conjugate to different depths and separated by 25 microns," commented the project in its published paper. "The pinholes are reflecting, so that signal rejected by one pinhole is sent to the next pinhole, and so forth. In this manner, no signal is lost, and signal collection efficiency remains high."

A third idea is to exploit the benefits obtained from these larger confocal probe volumes, such as improved signal strengths and avoidance of oversampling at cellular resolution, to scan over much larger fields of view than provided by standard confocal microscopes.

"This optimizes our Multi-Z microscope for fast, large-scale imaging of cell populations," noted the team.

The project tested its platform by imaging whole C. elegans worms between 500 and 800 microns long, too large to easily image all at once with a traditional confocal microscope. The Multi-Z technique simultaneously detected and monitored the activity of 42 neurons in the whole organism, even when the worms were moving.

Further trials were carried out on the hippocampal region of a mouse brain in an awake animal, where the platform imaged neuron activity within a volume measuring 1200 x 1200 x 100 microns at 15 Hz video rate. Using a suitable algorithm, the researchers were able to identify 926 neurons in the imaged volume.

The project now believes its confocal platform could be attractive for a number of biomedical research applications, thanks to its maximized signal collection efficiency. It should be readily scalable to a greater number of imaging planes by simply adding pinholes and detectors, or to a further enhanced axial range. The team has so far used two-color imaging, but multi-color data should require only minor modifications.

"Our method benefits from the contrast of confocal microscopy while being able to extend to volumetric imaging without sacrificing speed," said Badon. "Although extended illumination and reflective pinholes have been used before, this is the first time they were combined in a confocal microscope setup in a light-efficient way."