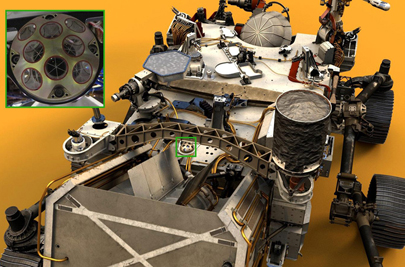 Visible near the center of Perseverance rover is the palm-sized LaRA (green box).

NASA's Perseverance rover, which is scheduled to land on Mars on February 18, 2021 is transporting the palm-size Laser Retroreflector Array (LaRA) for various communications and research purposes. There is also a further small LaRA on the InSight lander, called Laser Retroreflector for InSight (LaRRI). Furthermore, a retroreflector will be aboard the European Space Agency’s ExoMars rover that launches in 2022.

While there is currently no laser in the works for this sort of Mars research, reflectors like these are intended to enable scientists to conduct laser-ranging research including measuring the position of a rover on the Martian surface, test Einstein's theory of general relativity, and help make future landings more precise.

"Laser retroreflectors are shiny, pointlike position markers," explained Simone Dell'Agnello, who has led development of all three retroreflectors at Italy's National Institute for Nuclear Physics, which built the devices on behalf of the Italian Space Agency. "Because they're simple and maintenance-free, they can work for decades."

The devices reflect light back in the direction of its source. Perseverance's LaRA, for example, is a 50mm-wide (2in) dome speckled with 12mm holes containing glass cells. In each cell, three mirrored faces are positioned at 90-degree angles from one another such that light entering the holes is reflected in the same direction as its origin.

LaRA is significantly smaller than the retroreflectors on the Moon. The earliest ones, delivered by the Apollo 11 and 14 missions, are about the size of typical computer monitor and embedded with 100 reflectors; the units delivered by Apollo 15 are even larger and embedded with 300 reflectors. That is because the laser beams have to travel up to 770,000 kilometers (478,000 miles) to the Moon and back. By the return trip, the beams are so faint, they cannot be detected by the human eye.

The beams that Perseverance's LaRA and InSight's LaRRI were built to reflect would actually have a far shorter journey, despite Mars being around 401 million kilometers distant at its farthest point from Earth. Rather than traveling back and forth from Earth, which would require enormous retroreflectors, the laser beams would just need to travel back and forth from a future Mars orbiter fitted with an appropriate laser.

Such an orbiter could determine the precise position of a retroreflector on the Martian surface. Since Perseverance will be mobile, it could provide multiple points of reference. Meanwhile, the orbiter's position would also be tracked from Earth. This would allow scientists to test Einstein's theory of general relativity, as they have with retroreflectors on the Moon.

"This kind of science is important for understanding how gravity shapes our solar system, the whole universe, and ultimately the roles of dark matter and dark energy," said Dell'Agnello.

In the case of the InSight lander, which touched down on November 26th, 2018, laser-ranging science could also aid the spacecraft's core mission of studying Mars' deep interior. If the science team could use the lander's retroreflector, they could obtain more precise positioning data than InSight's radio provides. 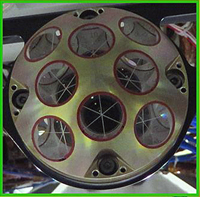 Detail of the LaRA.

Mars landings are typically hard. To help get Perseverance safely to the surface, the mission will rely on Terrain-Relative Navigation, a new technology that compares images taken during descent to an onboard map. If the spacecraft sees itself getting too close to danger (like a cliffside or sand dunes), it can steer away.

But in such a mission-critical event, you can never have too many backups. Future missions barreling toward the surface of the Red Planet could use the series of reference points from laser retroreflectors as a check on the performance of their Terrain Relative Navigation systems - and perhaps even boost their accuracy down to a few centimeters.

When the difference between successfully landing near an enticing geological formation or slipping down the steep slope of a crater wall can be measured in meters, retroreflectors might be critical. "Laser ranging could open up new kinds of Mars exploration," said Dell'Agnello.