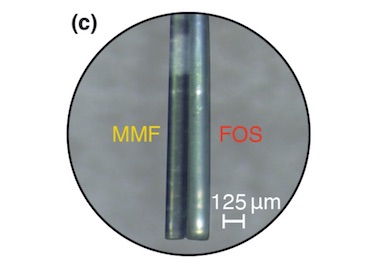 A hybrid imaging technique combining photoacoustic (PA) and fluorescence techniques could lead to a better visualizations of blood dynamics and associated biological processes.

Developed by a team lead by Emmanuel Bossy at Grenoble's Laboratoire Interdisciplinaire de Physique, associated with French research institute CNRS, the device may ultimately enable blood dynamics to be measured at the same time as neuronal activity.

Reported in Biomedical Optics Express, the breakthrough hinges on the use of a multimode optical fiber (MMF), allowing the construction of a thinner and less invasive ultrathin endoscope instrument than existing endoscopic PA platforms.

"Combining these imaging modalities could improve our understanding of the brain's structure and behavior in specific conditions, such as after treatment with a targeted drug," said Bossy. "The endoscope’s small size helps minimize damage to tissue when inserting it into the brains of small animals for imaging."

The work builds on previous research into ultrathin photoacoustic endoscopes and the potential addition of fluorescence imaging, in which a MMF for light excitation and a fiber ultrasound sensor for acoustic detection were combined in the one platform.

In that earlier research, the signal to noise ratio proved to be unacceptable, and the method required a large number of laser pulses to be averaged for each image. The new work aimed to tackle both these issues.

The project employed wavefront shaping to focus the excitation laser at the distal tip of the MMF, enhancing the power density by several orders of magnitude, according to the team's published paper. The focused laser can then be raster-scanned to image a sample.

"The focused spot of light allows us to build the image pixel by pixel while also increasing the strength of fluorescence and photoacoustic signals because it concentrates the light at the focal spot," explained Bossy. "This concentrated light combined with a sensitive detector made it possible to obtain images using only one laser pulse per pixel, whereas commercial fiber-optic acoustic sensors would have required many laser pulses."

The project's new sensitive detector was another key element, improving on the performance of components employed in previous platforms and enhancing the PA functionality of the device.

"We use a fiber-optic ultrasound sensor (FOS) that consists of a single-mode optical fiber containing a polymer microcavity, acting as a Fabry-Pérot interferometer, at its tip," noted the team in its BOE paper. "Such a FOS is particularly attractive for our approach as its footprint is the one of a single-mode fiber."

This novel FOS offers a much higher sensitivity and larger angular acceptance over its whole bandwidth compared to existing platforms, according to the project.

The next steps will include enhancing the platform's acquisition speed, so as to achieve an imaging rate of a few images per second, and applying it to in vivo studies, probably starting with a rodent brain to parallel an area of study where fluorescence microscopy has been successfully applied previously.

"Combining wavefront-shaping to focus through a MMF and an ultra-sensitive FOS allows photoacoustic imaging to be performed with a single laser pulse per pixel, an important step towards fast photoacoustic endoscopy," commented the project in its paper. "In addition we show that fluorescence imaging can be performed with the exact same setup enhanced with a photomultiplier for fluorescence detection."