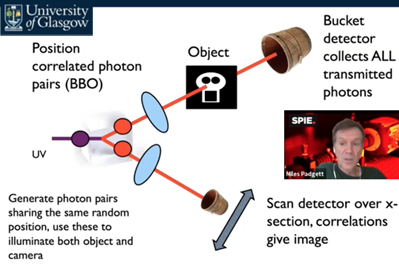 At the first symposia-wide plenary presentation of this week’s four-strand SPIE Digital Forum, Professor Miles Padgett, who holds the Kelvin Chair of Natural Philosophy in the School of Physics and Astronomy at the University of Glasgow, updated the substantial online audience on the UK’s QuantiC quantum technologies development hub.

Besides his day job, Professor Padgett is also Principal Investigator of QuantIC, the UK's center of excellence for research, development and innovation in quantum enhanced imaging, comprising eight universities and more than 40 industry partners. He was introduced by Dr. Karin Stein, of the Fraunhofer Institute of Optronics, System Technologies and Image Exploitation (IOSB), Germany.

“The UK is continuing its drive to commercialize quantum technology in imaging, sensing, communications and computing,” said Professor Padgett. “In the first part of my talk I will give an overview of the work of QuantIC, the UK hub tasked with bringing quantum technology to bear on real world imaging challenges, across the industrial, scientific, security and consumer markets.”

“Coinciding with the beginning of the pandemic, as QuantiC, we started our second funded phase, covering 2019-2024. Our mission is to bring quantum technologies to bear on real world imaging challenges across the industrial, scientific security and consumer tech markets. QuantiC is developing a SPAD – a single photon avalanche detector. The aim here is, rather than measuring the intensity of every pixel in an image, we measure the arrival time of all the photons in that pixel in the image, in order to create a 3D camera, a staring lidar, to measure fluorescence imaging.

“In another area of the QauntiC group, my colleagues Jonathan Matthews and John Rarity at Bristol University are developing a range of down-conversion sources, so if you need a turnkey source of entangled photons, they are providing that. My colleague in Glasgow, Daniele Faccio, is using the sensitivity of photon detection to look around corners using scattering laser beams to collect information about the hidden object.”

Professor Padgett then moved onto presenting his own group’s work, under the heading Beating Classical Limits with Entangled Photons. “There are three aspects to this presentation," he said, "quantum ghost imaging – using photons that have never seen an object and can still form an image; quantum imaging – imaging with entangled photon pairs to just beat the diffraction limit of a classical system; and, thirdly, how we can use quantum illumination and imaging while rejecting background and sensor noise.”

Using quantum physics or entangled photos for imaging systems is an idea that has been around for 20 years ago; Professor Padgett gave references to significant inspirational papers on the subject starting in mid-1990s, lead-authored by the likes of Yanhua Shih, Carlos Moknen, Bob Boyd and luigi Lugiato. 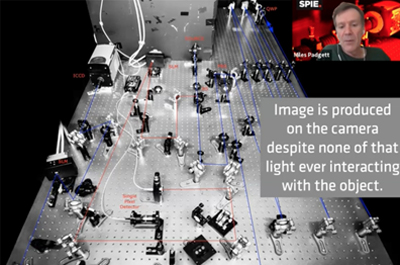 Ghost imaging: photons that have never encountered an object form its image.

“The recent work I’m talking about now is that which I have undertaken with Reuben Aspden, Peter Morris and Bob Boyd,” he said. “The basis of all of these systems that I am talking about today is the notion of parametric down conversion. We start off with a UV laser emitting at 355nm, which is incident on a non linear crystal (BBO) and the result of that nonlinear interaction is that the output comprises two photons at 710 nm each, thereby conserving both energy and the transverse momentum.

“The first thing that we notice is that the pair of created down-converted photons are created in the same place – they gave a very strong correlation in their position somewhere within the diameter of the pump beam. They are also strongly anti-correlated in their momentum so if one goes left the other goes off to the right.

“Although each photon is created in a random position, the corresponding photon in the pair is created in the same random position, meaning that matching random patterns are created. So this system can be used for imaging – by placing a camera in one of the patterns and the object in the other pattern, knowing that each site is being illuminated by exactly the same spatial pattern of individual photons.

Pairs of photons that are quantum entangled with each other are correlated in many degrees of freedom, creation-time, energy, and lateral position, for example. Fundamentally this means that measuring one of the photons gives near-perfect prediction of the corresponding property of the other photon.

In an imaging context, this second photon with known properties can then be used to probe an object. Using the correlations inherent in this entanglement we are able to increase the resolution of an imaging system and suppress both sensor noise and background light.

Prof Padgett said, “Our immediate goal is to recover an image of the object without interference from any thermal background or other light sources that might otherwise obscure or confuse what we are seeing. This work in the optical regime has strong parallels with proposals around quantum radar and it is an interesting exercise to consider what one might inform with respect to the other.”