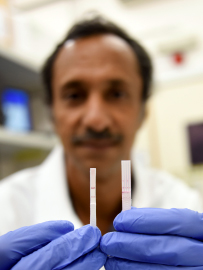 Trials of a new Covid-19 test developed in the Optoelectronics Research Centre (ORC), part of the Zepler Institute for Photonics and Nanoelectronics (ZIPN), Southampton, UK, have identified an inexpensive route to significantly expand testing capacity.

The developers say that the cheap diagnostic test can detect the presence of the SARS-CoV-2 virus in 10 to 15 minutes. It is hoped the kits could become an alternative to laboratory-based RT-PCR tests that require one or two days to return a result.

If the product is widely produced it could be rapidly deployed to clinics and doctors’ surgeries as a point-of-care test which would relieve the high demand currently being experienced by PCR testing centers. The low cost of the product could also pave the way for large-scale testing of individuals in schools, airports or businesses.

The University of Southampton's Faculty of Medicine has carried out trials using 150 patient swabs, 125 of which had tested positive with a PCR test and 25 that had tested negative. The results showed the new product can reliably detect Covid-19 in individuals with moderate to high viral levels, the most infectious patients.

Dr Collin Sones, ZIPN project lead, commented, “A cheap rapid test such as ours could complement existing tests being used to control the spread of virus. Its key strength is that it can be used at home by anyone, making daily testing of the population an achievable reality. The individuals whose samples were identified as positive by our test would be the ones more likely to spread the disease because of their high viral loads.”

The test involves taking a patient’s nasal swab and mixing it with a solution in a tube. Working in a similar way to the commonly available pregnancy test, a paper strip containing a capture antibody is then dipped into the tube to absorb the solution. As the liquid moves up the strip, a red line will appear if the virus is present in the sample. The team is in discussions with manufacturers who would be able to produce the test at scale and begin the process for obtaining the necessary regulatory approvals. 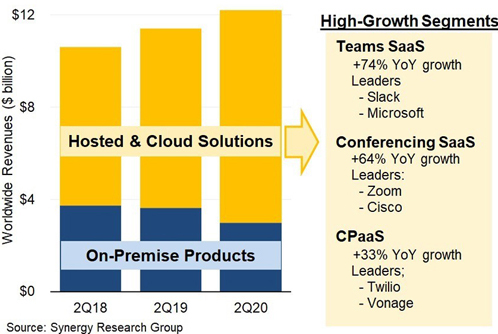 On the up: UC collaboration market trends.

New Q2 data from analyst firm Synergy Research Group indicates that spending on unified communications (UC) collaboration tools grew 7% from the second quarter of 2019, reaching over $12 billion. Most notably spending on hosted & cloud solutions grew by 18% while spending on on-premise products declined by 18%. Hosted and cloud now accounts for over three quarters of the market, says the report.

While most hosted and cloud segments are expanding, growth was particularly strong in teams SaaS, conferencing SaaS and CPaaS. As a result Zoom, Twilio, Vonage and Slack all now feature strongly in the top ten ranking of collaboration vendors. Within on-premise products the largest segments are IP telephony, video conferencing, on-premise email and content management.

While total on-premise spending is in decline, there was at least some growth seen in video conferencing equipment. The highest growth segments in hosted & cloud solutions were teams, conferencing and CPaaS, but the largest segments remain hosted PBX & UCaaS, hosted contact center and hosted/cloud email.

Jeremy Duke, Synergy Research Group’s founder and Chief Analyst, commented, “We were already seeing a steady migration in the collaboration market away from on-premise products and towards cloud solutions. Covid-19 and the sudden radical change in working practices have resulted in an acceleration of that transition. “CIOs need to find ways of maintaining communications and productivity in a world where remote working is the new norm and offices are sparsely populated. This is a world for which hosted and cloud solutions are perfectly suited.” 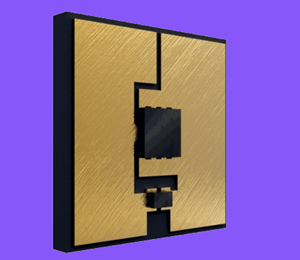 Crystal IS, an Asahi Kasei company, and Boston University’s National Emerging Infectious Diseases Laboratories (NEIDL) have performed research demonstrating the efficacy of Crystal’s Klaran UVC LEDs to inactivate SARS-CoV-2. The company initiated this research to understand how SARS-CoV-2, the virus which causes Covid-19, responds to ultraviolet light across the emission range of Klaran UVC LEDs (260 nm to 270 nm) and at different doses.

During the study, an array of Klaran UVC LEDs were used to irradiate a surface containing the virus. The results of the research are published in the journal Emerging Microbes & Infections. “The research by NEIDL demonstrates that SARS-CoV-2 can be effectively inactivated in a matter of seconds through exposure to low doses of UVC light in the key germicidal range,” said Larry Felton, President at Crystal IS.

However, comparing test results from this study against published results from the University of Miyazaki, which used UVC LEDs emitting at 280 nm, highlights a marked drop in efficacy beyond 270 nm wavelength.

Crystal IS believes this type of data can be used to help design innovative and effective disinfection solutions. Klaran UVC LEDs are currently being used by a number of partners, including Healthe AirTM by Healthe, Inc., and Big Ass Fans Clean Air System Haiku with UV-C, which provides continuous disinfection and clean airflow in retail, restaurant, fitness and office settings. 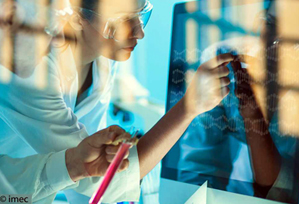 imec, a research and innovation hub in nanoelectronics, photonics and digital technologies, has announced elPrep5, the latest version of its software platform for DNA analysis.

The imec platform encompasses the full analysis pipeline from data preparation to variant calling on a similar hardware infrastructure, opening new opportunities and efficiency gains for hospitals and medical practitioners.

“This is the breakthrough we have been anticipating for years. Finally, we can run the entire DNA analysis pipeline with a single software platform solution, and faster than ever,” said imec researcher Dr. Charlotte Herzeel. 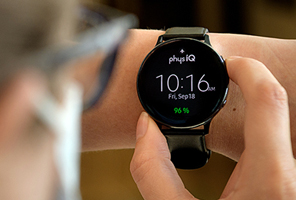 Researchers at Purdue University, West Lafayette, IN, are helping to develop physIQ software that could indicate whether a person should get tested for Covid-19 by detecting specific changes in heart and breathing rates while the person wears a smart watch.

Purdue University researchers have begun a study that would help determine if continuously collected biometric smartwatch data could be used to reliably and accurately detect these signs early. Data from the study will inform new algorithms to be developed by physIQ, a Purdue-affiliated digital health technology company based in Chicago. The company has support from the Purdue Research Foundation’s Foundry Investment Fund.

Smartwatches on the market already collect a wide range of physiologic data, but incorporating metrics such as heart rate, heart rate variability and respiration rate that may help detect Covid-19 at the earliest stages will take more research, studies by companies such as Fitbit have stated. Although smartwatch-like devices are not currently substitutes for gold-standard diagnostic tests used in clinics and hospitals, some wearable devices are starting to serve as tools for helping a clinician make a diagnosis.

“There won’t be a point where a smartwatch can tell you that you’re Covid-19 positive, but it could potentially say, ‘Within the next couple of days, you might be getting sick and should go get tested’,” said Craig Goergen, Purdue’s Leslie A. Geddes Associate Professor of Biomedical Engineering.