2018 SPIE Startup Challenge Winner gets $5.2M series A round, including backing from Sony, plus $2.1 M SBIR grant from US NIH. 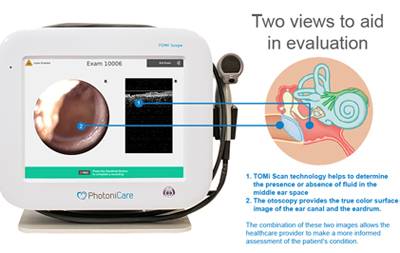 Earlier this year, the FDA granted clearance for the TOMi Scope. Click to expand.

PhotoniCare, based in Champaign, IL, USA, a company dedicated to revolutionizing healthcare by providing physicians with diagnostic tools, has announced an oversubscribed $5.2 million Series A financing led by i2E Management Company, with co-investment from OSF Ventures, Sony Innovation Fund, and Dreampact Ventures.

In February 2018, PhotoniCare was named winner of the SPIE Startup Challenge for its optical non-invasive ear inspection technology, during Photonics West in San Francisco.

In January, 2020, the company announced that the U.S. Food and Drug Administration had granted clearance for its TOMi Scope for non-invasive optical imaging of the middle ear. The only technology capable of visualizing through the eardrum to assess middle ear fluid directly, the simple-to-use TOMi Scope helps to determine the presence or absence of fluid in the middle ear and to characterize the type of fluid.

Designed to eliminate subjectivity and speculation, the TOMi Scope allows physicians, for the first time, to directly visualize fluid in the middle ear where ear infections reside, and to measure the fluid’s density even in the presence of wax – providing objective data upon which to base their decisions.

The funds will be used to expand PhotoniCare’s executive team, ramp up manufacturing, execute on the company’s sales and marketing plan, fuel artificial intelligence development to enable real-time decision support for the TOMi Scope, and expand reimbursement activities and customer support.

PhotoniCare also announced it has appointed Jeff Hydar, an award-winning strategic sales executive with over 20 years of pharmaceutical and medical device sales and leadership experience, as its new Chief Commercial Officer. 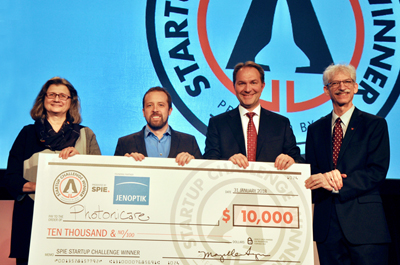 In 2018, PhotoniCare was named winner of the SPIE Startup Challenge.

Most recently, Hydar served as Vice President of Sales at Kent Imaging where he led product launches to commercialization and developed strategic partnership agreements to expand company awareness and market presence. His prior experience with Johnson & Johnson, LifeCell (Acelity), and Medline focused on launching new medical technologies and devices.

“This funding milestone, and the addition of Jeff to our team, will help us deliver on our vision to advance a new gold standard technology for ear health,” said PhotoniCare co-founder and CEO Ryan Shelton. “Jeff and his long track record of success launching innovative new medical technologies will be an invaluable addition as PhotoniCare transforms to a commercial-stage company.”

"PhotoniCare has made notable strides in the diagnostic space, with stand-out innovation that is raising the bar industry-wide,” said Hydar. “I’m pleased to join this talented group of individuals in its mission to provide better diagnostic technologies to clinicians, starting with this simple-to-use tool for physicians, nurse practitioners, physician’s assistants, nurses, and technicians.”