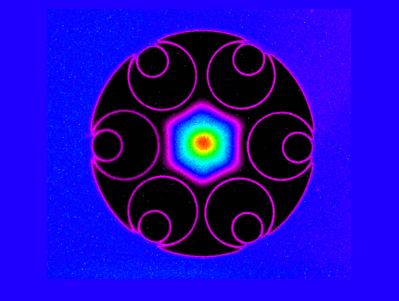 Light trapped in and guided along the air filled core of a hollow-core fiber.

The University of Southampton’s Optoelectronic Research Centre, (ORC), based in the Zepler Institute of Photonics and Nanoelectronics, UK, announced "significant breakthroughs" in hollow-core fiber (HCF) technology at ECOC2019 in Dublin, last week.

Hollow-core fibres are optical fibres where the conventional glass in the core is replaced by a gas or vacuum. These fibers, with a holey center, have interested scientists and engineers around the world for decades owing to their special properties, which include supporting faster light speeds and thus less information delay than glass-based counterparts.

This is an important attribute for data centres, 5G mobile communications systems and potentially even driverless vehicles. Remarkably, these fibers also have the potential for lower loss and higher data transmission capacity than the conventional all-solid glass optical fibers in use today.

The breakthrough, presented at ECOC 2019, unveils hollow core Nested Antiresonant Nodeless Fibre (NANF) with a loss of 0.65dB/km across the full C and L telecommunication bands. This has been backed up with a data transmission test, reporting the longest hollow-core fibre transmission on record, reaching 340km.

The testing was done in collaboration with Professor Pierluigi Poggiolini’s group at the Politecnico di Torino and with ORC spin out Lumenisity, a company developing cable solutions to address the so-called "bandwidth crunch" in high capacity communications systems.

The research is part of the ERC-funded project LightPipe, which aims to develop novel, high-performance hollow core optical fibres. Research group head and principal investigator Professor Francesco Poletti comments, “The whole group is absolutely delighted with these amazing results, which come as the culmination of many years of hard and dedicated work.

“By showing that losses below 1dB/km are possible in a hollow-core fibre, we have overcome a significant psychological limit that many thought impossible to break. Moreover, we have shown that no fundamental limitations would prevent long-range data transmission in these fibres. After some celebrations, we have already set ourselves the new target of matching the attenuation of solid fibres, which is on our short to mid-term horizon.”

This is the second consecutive year (link here to last year’s story) that the ORC has announced record-breaking loss reductions in hollow-core fibre. The research centre is progressing at pace with these new discoveries and believes there is much more to come.

Professor Sir David Payne, Director of the ORC, commented, “Hollow-core fibres have many advantages over standard telecommunications fibre that criss-cross the world today. The transit time is less, and they do not suffer non-linear impairments, because light travels extremely effectively in air. Up to now, air core fibres have struggled to match the losses exhibited by silica. These incredibly impressive results show we are now within stabbing distance of a challenge to conventional fibres.”

As well as transforming the way that both humans, and progressively more importantly machines, exchange data by substantially increasing the bandwidth, speed and responsiveness of future optical and wireless communication network, these discoveries will also revolutionize a wide range of applications beyond communications.

Many of these applications are being explored in the UK EPSRC-funded Airguide Photonics project. Professor David Richardson, ORC Deputy Director and Airguide lead investigator, commented, “These huge advances reported will ultimately have a profound impact in a number of application areas that currently use conventional solid glass optical fibres whose performance is limited by the optical properties of silica.

“For example, hollow core fibres enable new and better ways to make, break and fix things using intense laser light delivered to the work piece by exploiting the fibres greatly enhanced optical power handling properties; provide new ways to sense and monitor the environment by exploiting the strong interaction of light with gases confined in the hollow core; and allow improved imaging and treatment of diseased tissue through the delivery of intense laser beams deep into the body.”

Today, it is more conceivable than ever that hollow-core fibre will become the next generation of optical fibre, enabling novel, higher performance networks and much more besides.