Two-stage deal to buy optics metrology firm is expected to complete by the end of next year. 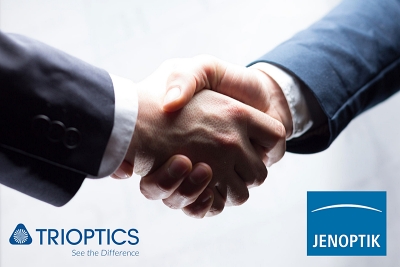 Trioptics is set to become part of Jenoptik, after the photonics giant agreed a two-stage deal to acquire the optical metrology specialist in its entirety by the end of next year.

Headquartered in Wedel, just outside Hamburg, Trioptics was founded back in 1991 by current CEO Eugen Dumitrescu and two business partners. Since then, the firm has grown to employ more than 400 people - including 100 in research activity - at sites across Europe, Asia, and the US.

Thanks to strong sales growth in recent years, Trioptics’ annual turnover reached around €80 million in 2019, says Jenoptik. It means that Jenoptik will add around 10 per cent to both its annual revenues and its workforce once the deal is completed.

Wave of digitization
Dumitrescu, who along with CTO Stefan Krey will remain with the company post-acquisition, said:

“Together with Jenoptik, we can better capitalize on the growth potential created by the next wave of digitization, with its rapidly increasing demand for digital imaging, virtual reality, and connectivity. Thanks to the synergies that can be realized through the joint market presence, we will continue the dynamic growth of recent years.”

While the two firms have not specified the specific value of the transaction, Jenoptik stated that it corresponded to an enterprise value around ten times that of Trioptics’ predicted annual earnings before interest, tax, depreciation and amortization (EBITDA) in 2021.

With a current EBITDA of 27 per cent, that suggests Jenoptik is paying upwards of €200 million for the acquisition.

The Jena-headquartered company says it will fund the entire purchase with bridge financing, courtesy of an arrangement with long-term partner Landesbank Baden-Württemberg.

It will take place in two stages, with Jenoptik acquiring 75 per cent of shares initially. The outstanding 25 per cent will be purchased by the end of next year, as part of a performance-related evaluation.

Although the acquisition has already been given the green light by Jenoptik's supervisory board, it remains subject to approval by the Bundeskartellamt - Germany's competition regulator. Jenoptik expects to receive the go-ahead to complete the deal by the end of September.

Asia-Pacifric sales
Jenoptik’s CEO Stefan Traeger said in a company announcement: “The acquisition of Trioptics is a major step in Jenoptik’s strategic development and in the process of focusing on optics and photonics.

“We are accelerating our profitable growth, thus placing our business on a broader and more international footing. This transaction will allow us to offer our customers a more comprehensive range of products and services for applications in the digital world.”

According to the two firms, Trioptics derives more than half of its sales revenues from Asia. In contrast, Jenoptik’s sales are much more reliant on the European and US markets. Figures show that in 2019, Jenoptik’s Asia-Pacific regional sales totaled €97.2 million, just over 11 per cent of the company’s total revenues for the year.

“Trioptics is a leading supplier of equipment used to test optical components and sensors, and has good market access to many smart phone and camera manufacturers and their suppliers, among others,” pointed out Jenoptik.

“With these, the company is generating a major part of its revenue. Its integration will enable Jenoptik to better scale its existing test equipment business [part of its "Light & Optics" division].”

Other areas where the two companies’ combined expertise in optics and industrial imaging is expected to pay dividends include emerging virtual and augmented reality (AR/VR) applications, for both industrial and consumer use.

Autonomous vehicles and advanced driver assistance systems are seen as another key area, specifically for manufacturing the required precision optical components and systems.