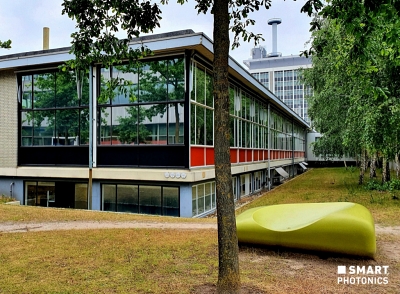 The photonic integrated circuit (PIC) foundry Smart Photonics, based at the High-Tech Campus in Eindhoven, has attracted €35 million in series C venture finance.

Led by Amsterdam’s Innovation Industries, the Dutch investor consortium is providing funds for the compound semiconductor epiwafer producer to expand manufacturing capacity at its headquarters, and to accelerate the development of more advanced photonic integration technologies.

Also supporting the planned expansion is the Netherlands government, via its Ministry of Economic Affairs and Climate Policy. Other private backers include KPN Ventures, the local photonics cluster PhotonDelta, and existing shareholders.

InP epiwafers
Specializing in indium phosphide (InP) epiwafers since it was set up back in 2012, Smart Photonics says it has since attracted a global customer base, with leading US, European, and Asian customers alongside a number of smaller ventures calling on its services.

Lead backer Innovation Industries is regarded as one of Europe’s most active independent investors in the photonics sector.

Among its existing portfolio holdings are another Dutch PIC specialist in the form of Enschede-based PHIX, which offers automated assembly services for PIC-based devices.

An accompanying PDK forces users to obey a set of certain pre-defined design rules provided by the Eindhoven fab, thus removing any requirement for users to have the in-depth knowledge and expertise required to fabricate a functional device. Circuit designs can also be exported to a layout tool, says the firm.

“We are truly impressed by the quality of the team and believe that they will successfully lead the company through its next phase of growth,” Sintenie added.

“We are confident that [Smart Photonics] will contribute to a strong and healthy photonics ecosystem that will drive cutting-edge technology development ensuring continued formation of exciting start- and scale-ups in this attractive industry.”

Photonics ecosystem
Smart Photonics’ CEO Johan Feenstra explained that the additional funding would allow the foundry to scale up volumes as its customers began launching their first PIC-based commercial products.

Ewit Ross, who heads up the Dutch “PhotonDelta” photonics industry cluster, added: “Smart Photonics fulfils a key function within our growing European photonics ecosystem and [is] of utmost importance as the fabrication of PICs enables innovative products in many application domains.”

Ross suggests that the growth of Smart Photonics will have a “profound” impact, and also benefit from the wider activity and innovation across Europe's maturing supply chain for integrated photonics.

“We are thrilled to participate in this round as the national growth accelerator for the Dutch integrated photonics industry,” Ross said.

Miriam Dragstra from the local Brabant Development Agency added: “Recognized as one of Europe’s key enabling technologies, photonics has the potential to drive economic growth and provide solutions to some of the most pressing societal and environmental challenges of our time.”