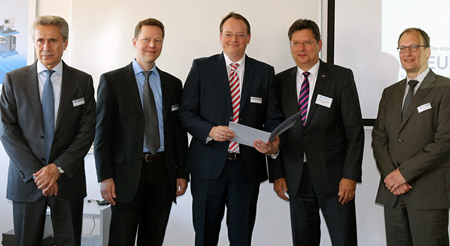 Minister Meyer and Trioptics staff at the presentation of the grant notification.

A grant for the development of a new wave front sensor has been awarded to Trioptics, Wedel, Germany, a developer of optical testing instruments. The unspecified amount of funding was presented at the end of August by Reinhard Meyer, Minister for Economic Affairs, Employment, Transport & Technology, on behalf of the EU's ERDF and the state of Schleswig-Holstein.

Trioptics will be developing a next-generation wave front sensor s part of a project entitled “MEMS Wave Front Sensor for the Characterization of Optical Components – WaveScan“. The company will be sup-ported by the state’s economic program with funding from the European Regional Development Fund.

Project Manager Dr. Florian Mathieu commented, “It has been excellent to learn that the importance of our project is shared by the state of Schleswig-Holstein and the EU.” His colleague Dr. Aiko Ruprecht, Manager of Advance Development, added, “We expect this project to show a solution for cir-cumventing the limitations of current Shack-Hartmann sensors.”

Specifically, the goal of the project is to increase the dynamic area of wave front measurements based on current MEMS technology – miniature assemblies in the micrometer range in order to meet increasingly demanding requirements. This is especially true for the lenses used as intraocular lenses and contact lenses in ophthalmology and in endoscopes in medical technology. Schleswig-Holstein’s Meyer commented, “This project fulfils the requirements for measuring technol-ogy which has to be capable of measuring the characteristics of highly complex lenses for quality control purposes after manufacturing.”

Wave front sensors can be used for the detailed characterization of single lenses and lens systems. The most commonly used type of wave front sensors are Shack-Hartmann sensors. In simple terms, a Shack-Hartmann sensor consists of a plane matrix of a large number of micro lenses that focus the incoming light onto a CCD or CMOS sensor, generating a characteristic spot pattern. 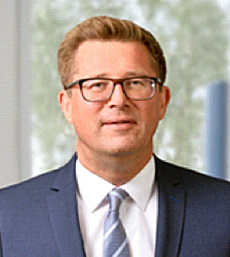 Image processing can be used to reconstruct the wave front from the spot pattern and compare it to the theoretical design of the lenses. Inherent to their functional principle, Shack-Hartmann sensors are limited with regard to lateral resolution and dynamics, so that steep gradients and severe curvatures of a wave front can only be measured up to a certain limit.

Founder and managing director of Trioptics, Eugen Dumitrescu is taking significant steps to develop the company to keep pace with its rapid business growth. After having decided to start building a new headquarters in Wedel, Germany, he is consolidating the management board by appointing Steffan Gold as second managing director.

Gold has 25 years’ experience in the optical industry: in 1989 he began his career path in mar-keting and sales at Leica Camera; in 2002 he was appointed general manager of Viaoptic; and in 2009 he joined Satisloh, a supplier of optical machinery for precision optics, where he became managing director.