Swansea-led collaboration aiming to extend the reach and application of photovoltaics beyond the provision of stationary energy. 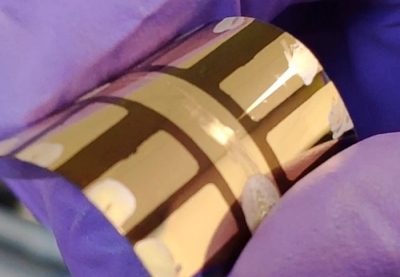 Awarded by the Engineering and Physical Sciences Research Council (EPSRC), part of the winder UK Research and Innovation (UKRI) umbrella organization, the five-year project will support researchers at Swansea University, the University of Oxford, and Imperial College, London.

Addressing limitations
The Application-Targeted and Integrated Photovoltaics (ATIP) project, which also features 12 industrial partners including Tata Steel, Airbus, and Cisco Systems, is looking to organic and perovskite materials to provide the kind of cheap, lightweight, and flexible solar cells that are needed to push PV beyond fixed panels.

“With these three leading centers working together, we will be able to advance the next generation of solar technologies from the lab to the real world more quickly, for the benefit of the UK and the rest of the world.”

According to Sustainable Product Engineering Centre for Innovative Functional Industrial Coatings (SPECIFIC) consortium at Swansea University, which is coordinating the project, the research will look to address the various issues currently limiting the advance of next-generation printed PV technologies.

Key objectives include developing a better understanding of the processes that determine the performance and scalability of organic and perovskite cells, with a focus on new devices with unique selling points compared with incumbent PV technologies.

The team will also look to demonstrate “upscaling” and integration strategies to maintain laboratory-scale efficiencies in integrated sub-modules, and achieve viable operational stability in at least one printed PV platform.

Beyond stationary solar panels
According to an abstract outlining the original grant application, specific target sectors include the provision of power for high-value communications - for example battery integratable solar cells for UAVs - and improved energy and resource efficiency power for the built environment, such as solar windows and for 'internet of things' devices.

“In essence we seek to extend the reach and application of PV beyond the provision of stationary energy,” stated the team.

To achieve that, they will look to develop low-carbon, low-cost manufacturing methods that will enable the novel PV technologies to be produced at scale, as well as prototypes showing how they can provide solar power in new applications.

ATIP brings together expertise from Swansea’s new Centre for Integrative Semiconductor Materials (CISM), the Centre for Processable Electronics (CPE) at Imperial, and Oxford's physics department, where Henry Snaith’s group has pioneered the development of both organic and perovskite solar materials.

Michael Walls, a professor from Loughborough University who is also the director of EPSRC’s Supergen Solar Network, said: “The electricity generated by solar modules has become an important part of the global energy mix. Its continued growth is vital to the UK’s commitment to net zero carbon emissions by 2050.

“UK researchers have pioneered a new and super-efficient solar technology based on perovskite chemistry. Th[is] new EPSRC-funded project will take this exciting technology closer to deployment.”