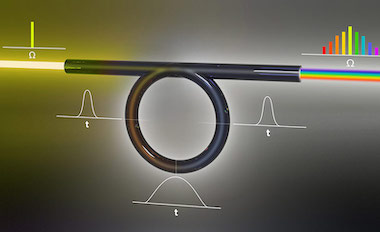 A project at the University of Rochester Institute of Optics has demonstrated a modified architecture for the generation of femtosecond laser pulses that could ultimately make such pulses more readily available to researchers.

The breakthrough, with potential implications for a range of engineering and biomedical applications including spectroscopy, frequency synthesis and distance ranging, was published in Physical Review Letters.

The project from the lab of Rochester's William Renninger used a modified Kerr resonator to generate pulses said to feature a broad spectral bandwidth and a compressed pulse duration of 210 femtoseconds.

"Simply put, this is the shortest pulse ever from a gain-free fiber source," commented Renninger.

Kerr resonators are structures designed to collect and support ordered sets of optical waves, in particular the class of pulse called solitons - solitary optical waves able to maintain a well-defined shape and width while propagating in a particle-like fashion over long distances.

Such Kerr structures have been the subject of research as potential sources of femtosecond pulses for some time, but controlling the behavior of the solitons involved has proven to be challenging, with the key parameter of pulse duration lagging behind those from traditional mode-locked laser-based sources.

The Rochester breakthrough involved the creation of "stretched-pulse solitons," in which the temporal profile of a soliton is carefully modified during each round trip it makes of the resonator.

"In the stretched-pulse soliton Kerr resonator, a single-frequency laser enters a fiber ring cavity, generating a broad bandwidth comb of frequencies at the output that supports ultrashort femtosecond pulses," according to Rochester's description of the process.

"Inside the fiber cavity the pulses stretch and compress in time, reaching a minimum duration twice in the cavity near the center of each of the two fiber sections. The stretching and compressing temporal evolution is a salient characteristic of femtosecond stretched-pulse soliton Kerr resonators."

In trials, the Rochester project modeled the effects of different parameters on the pulses produced in the new architecture, and then found that experimental results were in excellent agreement with the numerical simulations. A set of design guidelines relating to the use of Kerr resonator stretched-pulse solitons has been created, making the technology a promising technique for femtosecond pulse generation.

Soliton lasers, in which the circulating pulses are either solitons or quasi-soliton species, are of interest for a number of applications, if the inherently complex features of the optics involved can be controlled or exploited.

A project at the University of Sydney recently developed a soliton laser source suitable for biomedical applications, in particular in ophthalmology, by finding a way to increase the pulse energy into the useful range for tissue cutting while mitigating any resulting thermal effects. The project announced at the time that achieving femtosecond pulses from its soliton source was the next goal.

At Rochester, William Renninger was one recipient of a National Science Foundation CAREER award in February 2020, which included funding to create open source access to information for the design and creation of advanced lasers sources generating femtosecond pulses.

Announcing the new findings, Renninger commented that much of the costs involved in novel femtosecond pulse technology relates to expertise rather than components, so his group intends to use part of the NSF CAREER funding to provide consulting for research groups at smaller universities in how to design and build femtosecond lasers for basic research.

“There are now commercial products but they’re very expensive, prohibitive for many research groups with limited budgets for equipment," said Renninger, who noted that his intention was to publish a design guide for stretched-pulse soliton sources online for use by anybody.