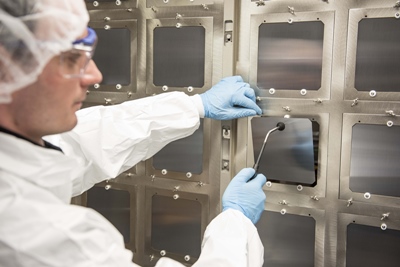 UK-headquartered Oxford PV is to lead a new consortium intending to further demonstrate the manufacturability of perovskite-silicon tandem solar cells.

Armed with €2.8 million from the German Ministry of Economic Affairs and Energy - part of the German government's wider investment in renewable energy development - the consortium will focus on preparing perovskite solar cell technology for high-volume manufacturing.

The award comes just a couple of months after Oxford PV’s development team produced a perovskite-silicon tandem cell with a record-breaking conversion efficiency of 27.3 per cent - thus eclipsing the best single-junction silicon cell performance, albeit with a tiny 1 cm2 area device.

Industrial format
The consortium’s effort will focus on manufacturing aspects including optimization of the perovskite-silicon tandem solar cell architecture.

It will also work on making further efficiency improvements but with industrial-format 156 mm x 156 mm wafer sizes, as well as refining industrial scale process technology, and carrying out life-cycle analysis to inform the social-environmental impact of the tandem cells.

Aside from Oxford PV, which has a manufacturing site in Brandenburg an der Havel, Germany, the consortium includes the vacuum coating specialist Von Ardenne, alongside scientific expertise provided by Helmholtz-Zentrum Berlin, the Fraunhofer Institute for Solar Energy Systems, and the Technical University of Berlin.

“Oxford PV has made substantial progress in scaling and preparing its technology for high-volume manufacturing. With commercial sized tandem cells already in production at our pilot line, it is now a matter of further optimizing the process, in preparation for commercial deployment.”

‘Easy transfer’
The company’s CTO Chris Case added: “The consortium partners bring together the perfect balance of expertise. Refining the manufacturing process of our perovskite solar cell technology will ensure the highest performing tandem solar cell in the field and the easy transfer of our technology into silicon solar cell and module production lines.”

Oxford PV adds that its own technology roadmap indicates perovskite-silicon solar cells extending beyond 30 per cent efficiency. The idea is that the addition of perovskite sub-cells would enhance the efficiency of conventional silicon cells to yield high-performance devices, without adding the kind of costs normally required to deliver such efficiency levels.

The UK firm also closed an £8 million funding round in May, at which point it told optics.org that it expected to be fielding commercial products by the end of 2019.

Among its competitors is the Polish startup Saule Technologies, which has signed a development deal with construction giant Skanska and is also working on a European project to develop the technology with key partners including the Belgian electronics research center imec, and a team at Ecole Polytechnique Federale de Lausanne (EPFL) in Switzerland.