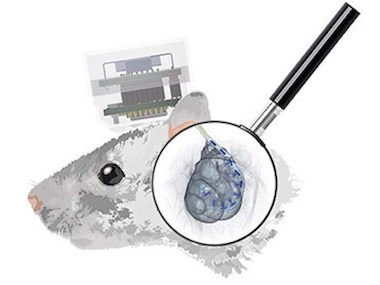 When the cochlea in the human ear no longer coverts auditory signals into neural impulses correctly, the result is a loss of hearing. This is known to be a common medical condition, affecting perhaps 360 million people.

Cochlear implants are an established treatment, using a microphone to detect sound and converting that sound into electrical impulses, split into several channels for different frequency ranges. Electrode contacts, typically 12 to 24 in number, then deliver the electrical impulses to the ganglion neurons of the cochlea.

But these devices can offer poor quality sound encoding, partly due to the large lateral spread of electrical current from each electrode, stimulating too many auditory neurons at the same time. A project at the University of Göttingen has now developed a light-based alternative device, reported in Science Translational Medicine.

"The lateral spread is considered the major bottleneck of electrical implants," said Tobias Moser of the University of Göttingnen. "Despite efforts such as multipolar stimulation and current steering, it seems hard or even impossible to overcome."

Neurons are not typically light sensitive, although the growing field of optogenetics has found elegant ways to induce neurons into expressing light-sensitive proteins through genetic modifications in so-called transgenic animals, and making the neurons react to illumination by laser pulse.

Since light can be better confined in space than electric current, optogenetic techniques could allow cochlea stimulation to be made more efficient. However, light sources for optogenetics have usually been individual GaN-based LEDs and optical fibers coupled to external lasers.

In designing an optical cochlear implant (oCI) for auditory treatment and future clinical translation, the Göttingen project had to develop multichannel devices suitable for this very specific purpose.

The eventual design featured a linear array of 10 LED chips, each 270 by 220 microns and emitting at 457 nanometers, integrated onto microfabricated 15-micron-thick polyimide-based carriers with interconnecting lines to address individual LEDs.

"The linear array of 10 LEDs at the oCI tip was designed with a pitch of 500 or 350 microns," noted the project in its published paper. "In addition, an array with four LEDs containing a temperature sensor integrated beneath the first LED chip enables a precise resistance measurement, and thus allows monitoring of potential temperature increase inside the implant."

Having optimized the design for rodent ears, the project inserted the device into transgenic rats and characterized the oCI's stimulation of the animals' auditory nerves. Comparing the spatial spread of excitation from the LEDs of the oCI to that from electrodes of a conventional electrical implant by monitoring the animal's midbrain allowed the frequency selectivity of the oCI device to be characterized.

In behavioral experiments, the team began with rats with normal hearing and trained them to perform a behavior driven by sound. After deafening the rats, the team implanted the oCI device and found that the animals could still perform the acoustically trained behavior with the aid of the multichannel implant.

According to the project, results showed that use of gene therapy and the optical implant in conjunction led to an improved frequency selectivity compared with the electrical alternative, and future enhancements to both the size of LEDs and the spread of light from each emitter could enhance this parameter further.

Although further work will be needed before clinical trails using the device can start, including more detailed studies of behavioral analysis connected with the technique, the team has founded a spin-out company, OptoGenTech, to potentially assist translation of the gene therapy and oCI combination into a human clinical trial and, eventually, bring it to market.

"This is the first demonstration and characterization of preclinical hearing restoration by a complete multichannel oCI system based on LEDs," commented Moser.