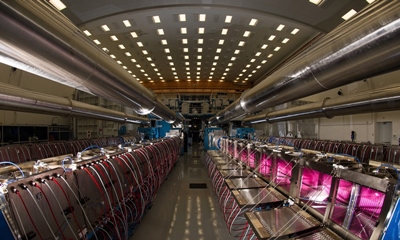 Rochester’s Laboratory for Laser Energetics (LLE), which earlier this year had been earmarked for major cuts by the Trump administration, is instead set to receive a significant boost to its funding.

According to a release from the office of minority leader Chuck Schumer, Congress’ bipartisan passing of the fiscal year 2019 Energy and Water Appropriations Bill includes $80 million for LLE and its high-power Omega laser facility.

“This funding level rejects the [Trump] administration’s budget request to cut the Lab’s funding and a three-year phase-out of all federal support for LLE,” Schumer announced. “The bill also maintains stable support for the overall Inertial Confinement Fusion (ICF) program at the US Department of Energy (DOE) that supports LLE and other national laboratories.”

February threat
Back in February, the University of Rochester slammed a plan in the official Presidential budget request to ramp down LLE’s funding over three years with $30 million of budgets cuts, starting next month.

The Rochester lab is one of three major US facilities working on ICF - regarded by many in the community as offering a viable route to fusion energy. Work there complements similar research carried out at the larger, 192-beam National Ignition Facility (NIF) in California, although much of the activity relates to “virtual” nuclear weapons testing and scientific studies.

At the time of the Presidential budget request, optics.org publisher SPIE pointed out that while the proposed cuts represented a threat, it was the US Congress that ultimately controlled appropriated funding – and which had previously agreed solid backing for such activities.

Schumer subsequently visited LLE, outlining a three-year plan to “save” the facility - as well as proposing $75 million in federal funding for fiscal 2018, alongside a five-year co-operative agreement to ensure longer-term stability for the lab’s high-skilled workforce. In the latest bill, that funding is set to rise further.

“Securing this $80 million represents a two-year, $12 million increase to ensure that 340 Rochester workers can now stay on the job at [LLE], keeping our nuclear weapon stockpile safe and reliable while pushing the frontiers of energy research at a time when countries like China and Russia are working to beat the US to new technological advances,” Schumer said following the Senate’s 92-to-5 vote in favor of the bill. The House of Representatives then voted 377-to-20 in support.

Schumer’s Democrat colleague and New York Senator Kirsten Gillibrand added: “The Rochester Laser Lab is one of our nation’s vitally important scientific research labs, and it would have been a huge mistake to close it down.”

“Seminal moment”
University of Rochester president Richard Feldman responded by describing the fiscal 2019 budget news as “a seminal moment” in the 48-year history of LLE.

“With this funding, I am proud to say that the LLE will continue to serve as the largest university-based [DOE] program in the nation and home to the largest and most powerful laser systems found at any academic institution in the entire world,” he said.

LLE's director Mike Campbell added: "Thanks to incredibly strong, bipartisan Congressional support led by Senator Schumer and an outcry from the scientific community, we not only reversed a $30 million cut and proposed closure of the LLE, but we secured a $5 million increase over last year.

"This represents an unprecedented $12 million increase over the last two fiscal years. The $80 million represents the highest level of federal funding ever appropriated to the LLE in the university's history, and will serve as a critical basis for the first year of our new cooperative agreement with the DOE."

Among other local political representatives, the Republican Congressman Tom Reed added: “We recognize how critical the Omega Laser Facility is for our nation’s nuclear research. We care about ensuring their program was fully funded at a fair level consistent with their proposed cooperative agreement with the National Nuclear Security Administration and are proud to announce this accomplishment.”

President Trump is expected to sign the bill, which includes $545 million spending for the ICF program - up from $418 million in his initial request - into law shortly.