University of Sydney project could lead to innovations in nonlinear optics and its applications. 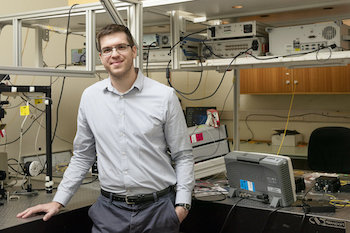 A project at the University of Sydney researching ultrashort laser pulse generation has demonstrated a way to significantly increase the amount of energy released by each pulse, a finding with potential applications in surgery and engineering.

The breakthrough, reported in Nature Photonics, involves the use of soliton lasers, in which careful control of pulse compression forces a solitary optical wave to maintain a well-defined shape and width, while propagating in a particle-like fashion over long distances.

A soliton laser is a potentially cost-effective and robust way to achieve ultrashort pulses, but until now such sources could not deliver sufficient energy to be properly useful in many real-world applications.

If the energies could be raised, then soliton sources may be particularly valuable in eye surgery, where conventional ultrafast lasers have already made substantial inroads thanks to their ability to reduce detrimental tissue damage and thermal effects.

"The fact that soliton waves in light maintain their shape means they are excellent for a wide range of applications, including telecommunications and spectrometry," said Antoine Runge from the University of Sydney. "However, while lasers producing these solitons are simple to make, they do not pack much punch. A completely different, and expensive, physical system is currently required to produce the high-energy optical pulses used in manufacturing."

The new breakthrough hinges on what the team is calling "a new law in laser physics," and on the project group's previous development of "pure-quartic solitons." a class of laser pulse in which high-order dispersions are strategically exploited, rather than being mitigated as much as possible.

"Higher-order dispersion can be leveraged to access an uncharted regime of ultrafast laser operation," commented the project in its published paper, which outlines a beneficial combination of fourth-order dispersion effects and a particular nonlinear optical property termed the Kerr effect.

"Our mode-locked laser, with an intracavity spectral pulse shaper, emits pure-quartic soliton pulses. Phase-resolved measurements demonstrate that their pulse energy scales with the third power of the inverse pulse duration."

In a conventional soliton the power is inversely proportional to the pulse duration, so halving the pulse time means getting twice the energy; but the new third-power relationship means that the same halving of duration results in an eight-fold increase in pulse energy. This is the new law that the team believes can now be exploited in applications where organic tissues are involved.

"Our results have the potential to make soliton lasers useful for biomedical applications," commented co-author Andrea Blanco-Redondo. "In this research we produced pulses that are as short as a trillionth of a second, but we have plans to get much shorter than that."

In particular the project's next goal is to produce femtosecond duration pulses from its pure-quartic soliton laser, which according to the theory will mean ultrashort laser pulses with hundreds of kilowatts of peak power. This could in turn open a new way to employ high-energy pulses without damaging whatever base material they are directed towards.

"These results not only demonstrate a novel approach to ultrafast lasers, but more fundamentally they clarify the use of higher-order dispersion for optical pulse control, enabling innovations in nonlinear optics and its applications," noted the project.