Investment intended to accelerate production ramp and fund next wave of technology development. 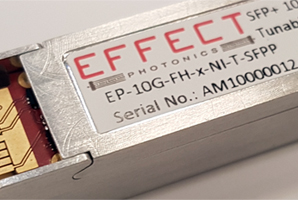 Effect Photonics, based in Eindhoven, Netherlands, a developer of high performance DWDM optical components based on its optical system-on-chip technology, has announced the completion of its series-B funding round led by Innovation Industries. Financial details were not revealed.

The company stated that the latest funding round will “accelerate the ramp of Effect’s tunable SFP production line and the development of future technologies.” Its technology developments are designed to address the need for low-cost, wavelength-tunable optical transceivers with industrial temperature specification to be deployed within the next generation 5G mobile infrastructure.

The global market demand for optical transceivers is expected to grow to $12bn by 2023, from $6bn in 2017 (according to market anlyst Lightcounting, in 2018).

5G mobile or fifth-generation wireless communication will enable interconnectivity with many different devices such as: HD-streaming smartphones; driverless and intelligence-assisted vehicle; HD and “always on” security cameras; and augmented and virtual reality systems.

Effect says that these developments will accelerate the adoption of the Internet of Things, interconnecting computing devices and machines without the need for human-to-human or computer interaction. The number of connected devices in 2017 was 20.35bn (said to be worth over $1bn annually), which is expected to rise to 51.1bn connected devices by 2023 (according to analyst Statista, in 2018).

James Regan, CEO at Effect, commented, “We are experiencing now in photonics what we saw in the electronics integration revolution last century. There the birth of the Integrated Circuit enabled the mass deployment of powerful solutions.“At Effect Photonics we integrate all of the optical functions into a single chip and combine it with low-cost, non-hermetic packaging and automatic tuning. Thus DWDM, the proven solution for core and metro networks, is now simple, cost-effective and scalable enough for 5G infrastructure rollouts around the world”.

Boudewijn Docter, CTO commented, “This new round of funding also allows us to really push forward with our next-generation technology programme to bring even more powerful optical systems to the edges of the network.”

Nard Sintenie, Partner at Innovation Industries, a Netherlands-based investment group that contributed the latest funding, commented, “We are delighted to be a part of Effect Photonics which is at the forefront of developing optical transceivers with its photonic integrated circuits targeted at high growth markets such as 5G and fuelling the adoption of IoT enabled devices.”

The Innovation Industries Fund is supported by private and institutional investors such as PME and InnovFin Equity. InnovFin Equity with the financial backing of the European Union under Horizon 2020 Financial Instruments and the European Fund for Strategic Investments (EFSI) set up under the Investment Plan for Europe. The purpose of EFSI is to help support financing and implementing productive investments in the European Union and to ensure increased access to financing.