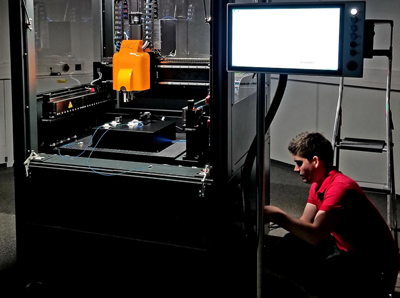 A new photonic chip (PIC) assembly machine presented to the University of Twente (UT), Netherlands, by the Fraunhofer Project Center will allow large-scale PIC production to become a reality. The partners say this development is significant because this high-precision work has previously only been performed by hand for small production runs.

The accompanying UT statement, released on June 18th, reads, “Europe is at the threshold of a technological revolution – the application of the power of light to solve our greatest global challenges. As a fast, compact, energy efficient and therefore sustainable option, it is suitable for many applications and will be an essential component of the societal challenges of the future.”

This installation is therefore an important step towards mass-production of faster and more energy-efficient PICs for applications in telecommunications, and more. The machine has been developed in collaboration with PHIX Photonics Assembly, an innovator in the field of assembly and packaging for the photonics industry.

Photonic chips are rapidly becoming widespread. They are expected to tap into a global market in the new 5G mobile standard. Photonics offers great benefits in many other applications too, for instance in sensors for medical applications. Success depends on the possibility of producing and assembling the chips in large quantities.In this respect, the new machine is a determining step, say the developers: "It places Twente at the forefront of technological development. Large-scale photonic chip production is expected to create thousands of new job opportunities.

The new assembly machine, developed for PHIX, makes the connection between the chip and the outside world via 16 fine glass fibres, in a fibre array, which are placed in the correct position individually. Placing the glass fibres and the chip holders is the next step in the automation process. Up to now these have all been labour-intensive production steps, the high cost of which has posed a barrier to large-scale introduction.

The Fraunhofer Project Center collaborates closely with PHIX Photonics Assembly on this project. Albert Hasper, PHIX director commented: "The market demand for equipment based on photonics technology will see an exponential increase. This is only the beginning. The new machine will facilitate the widespread use of chips in detecting, generating, sending, measuring and managing light."

On Tuesday 19 June, the 12th edition of the Photonics Event was held on the university campus. Billed as "the Benelux and German photonics community meeting point", the meeting was organized by branch association PhotonicsNL. At the same time, companies were updated with the latest developments in the photonics field by means of a varied programme. A demo of the high-tech assembly machine could also be seen on the University of Twente campus during event.