US team led by Nobel laureate used aerosol data to conclude that face coverings are effective at reducing infections significantly. 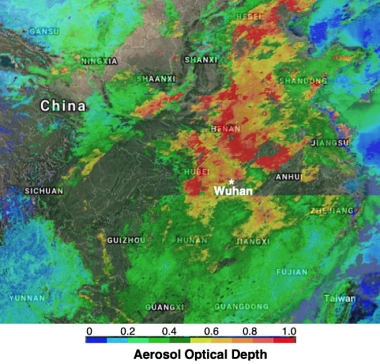 Scientists in the US have used multispectral satellite data to identify airborne virus transmission as the dominant route for the spread of Covid-19.

Writing in the journal Proceedings of the National Academy of Sciences (PNAS), Nobel laureate Mario Molina and colleagues reported that their analysis - which combines optical aerosol depth measurements with local infection rates and mitigation measures - showed that airborne contagion had dominated the spread of Covid-19.

Their paper suggest that the results have major implications for mitigating the spread of the virus, and that governments and public health authorities ought to be more focused on airborne transmission over a relatively long range.

“Our analysis reveals that the difference with and without mandated face covering represents the determinant in shaping the trends of the pandemic,” claims the team, which looked at the spread of Covid-19 in three locations - Wuhan, Rome, and New York City.

“This protective measure significantly reduces the number of infections,” they added. “Other mitigation measures, such as social distancing implemented in the US, are insufficient by themselves in protecting the public.”

Ozone expert
Atmospheric chemistry professor Molina, who works at the University of California, San Diego, won a share of the 1995 Nobel prize in chemistry for work showing that chlorofluorocarbon (CFC) compounds were a major threat to the ozone layer.

In their new PNAS paper, Molina and colleagues incorporated data collected in the green part of the spectrum by NASA's combined Moderate Resolution Imaging Spectroradiometer (MODIS) and the Tropospheric Monitoring Instrument (TROPOMI).

Launched on board the Terra satellite back in 1999, MODIS captures data across 36 spectral channels between 400 nm and 14.4 µm wavelengths. TROPOMI, launched by the European Space Agency (ESA) on the Sentinel-5P satellite in 2017, operates over a shorter wavelength span, but is also able to monitor aerosol levels.

That aerosol data indicates the level of regional pollution in different locations. In the Molina-led study it showed that the initial outbreak of Covid-19 in Wuhan coincided with the local “winter haze season”, and characteristically high levels of tiny “PM2.5” particulates that can both seed droplet (aerosol) formation and travel deep into the human lung.

And although more work to determine the viral “load” that such aerosols can carry is needed, as well as how exactly they disperse in the atmosphere, the study indicates that outdoor transmission of Covid-19 is likely exacerbated by air pollution.

“The airborne transmission pathways (indoor or outdoor), as well as the effects of ambient PM2.5 levels on virus transmission, may be variable among urban cities,” reported Molina and colleagues.

Airborne transmission ‘highly virulent’
In contrast, the level of aerosol air pollution in Rome and New York City was shown to be much lower than in Wuhan, with implications for the transmission of the virus and how it could best be mitigated.

But the authors suggest that, whatever the pollution levels, their work indicates that face masks provide one of the best and cheapest ways to reduce viral transmission through the air.

While concerns about transferring virus particles when putting on or removing a mask have persisted, if airborne transmission is - as the PNAS paper suggests - the dominant transmission route, those fears may be less significant than was previously thought.

“The inadequate knowledge on virus transmission has inevitably hindered development of effective mitigation policies and resulted in unstoppable propagation of the Covid-19 pandemic,” concludes the team.

“In this work, we show that airborne transmission, particularly via nascent aerosols from human atomization, is highly virulent and represents the dominant route for the transmission of this disease.

“On the other hand, social distancing, quarantine, and isolation, in conjunction with hand sanitizing, minimize contact (direct and indirect) transmission but do not protect against airborne transmission.”