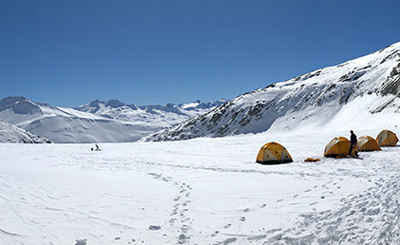 Ice work: Monitoring the Rhone Glacier with a network of optical fibers.

Seismic monitoring of glaciers is essential to improving understanding of their development and to predicting risks. Swiss National Science Foundation (SNSF) Professor Fabian Walter, who works at at ETH Zurich, has developed a new monitoring tool based on optical fibers. The fiber system is capable of monitoring entire glaciers; Switzerland alone has more than 40 significant glaciers up to 25km in length.

Glaciers are constantly moving and they therefore need monitoring. Satellite images give clues to their development. By listening to glaciers from inside, seismology enables scientists to understand their movements with greater accuracy.

However, because seismometers are difficult to install in glacial areas, seismic monitoring coverage of glaciers is patchy. In a recent study, Prof. Walter demonstrated that it is also possible to monitor glaciers using optical fibres. Not only are the fibers easier to install than seismometers, they also offer more measuring points. They thus represent a way of extending seismic monitoring coverage in areas that are difficult to access.

The work, which has just been published in the Nature Communications, took place at an altitude of 2,500 meters on the Rhone Glacier in the extreme north-east of the Swiss canton (region) of Valais. For five days during March 2019, two teams led by Prof. Walter and Andreas Fichtner, a specialist in seismology and wave physics at ETH Zurich, recorded micro-earthquakes using a 1km-long fiber optic cable installed a few centimeters below the snow cover on the glacier surface.

Distributed acoustic sensing was used to record disturbances in the optical signal – the result of seismic events within the glacier – at regular intervals of several meters along the cable. The recordings were converted into seismograms.

In his study, Prof. Walter reports that having a much larger number of sensors across the same monitoring area – 500 measuring points acted as sensors along the 1-kilometer cable – meant that the data obtained contained more information than those from seismometers, particularly as regards localising rockfalls and icequakes.

Moreover, the cable delivered a better understanding of the jerky stick-slip movements by which the glacier moves. New types of seismic waves were identified, something that had not previously been possible with seismometers. Jerky movements of this type were already known to occur in the ice sheets of Greenland and the Antarctic, but this was the first time their existence has been rigorously verified in the Alps.

Optical fibers are already used to monitor earthquakes in certain settings; but icequake specialist Walter is one of the first scientists to employ this technology on glaciers. “There are other teams already working on the subject – in Alaska, for example – because fibre optic technology offers benefits in this type of challenging environment,” explained the researcher, who conducted his study in partnership with the Swiss Seismological Service at ETH Zurich.

“Whereas it often takes several hours to install a seismological station capable of covering only a tiny part of a glacier, all we have to do now is lay out the cable and we have hundreds of sensors. In theory, the technology enables us to cover and monitor entire glaciers.”

By measuring seismic velocities, the fibre optic cable also yields additional information, such as details of the composition of the ice. It also enables scientists to measure ice deformation rates and understand the process by which crevasses form. Other applications remain to be tested outside glacier zones.