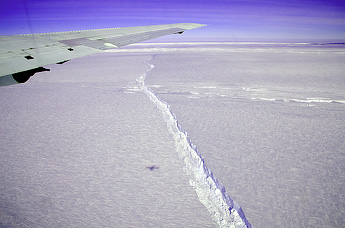 NASA's Operation IceBridge, a survey of ice conditions in the Arctic, Antarctic and Alaska, has completed its eleven-year operational program.

The project involved airborne instrumentation carried aboard a DC-8 and other planes, and was conceived out of necessity, as a means to collect data during the years between NASA’s two Ice, Cloud, and land Elevation Satellites, ICESat and ICESat-2. With the latter satellite successfully launched in September 2018, the curtain has now fallen on IceBridge.

"Operation IceBridge took what NASA had already learned how to do with planes at the poles and supersized it, with consistently successful airborne campaigns across the Arctic and Antarctic for eleven years straight," said project scientist Joe MacGregor.

"While IceBridge was focused on bridging the gap between ICESat and ICESat-2, it was sufficiently big and broad in scope that it generated a momentum all its own. IceBridge opened the door to new ways of thinking about monitoring the polar regions and enabled numerous unexpected discoveries, and brought new scientists and new data types into the fold."

A broad platform of science instruments was deployed in IceBridge, with optics and photonics heavily involved. In particular, laser altimeters were used to measure changes in ice elevation, and provide continuity with the science carried out by similar devices on board the ICESat satellites.

Instruments included the Airborne Topographic Mapper (ATM), a well-established NASA suite of devices based around two conically scanning laser altimeters designed to have an accuracy of better than six centimeters when operated at altitudes between 400 and 800 meters.

Another was the Land, Vegetation, and Ice Sensor (LVIS), an imaging laser altimeter system to collect data on surface topography and 3D structure by using a 1064-nanometer laser and three detectors. In combination with aircraft position and attitude, the sensor data produces topographic maps and vertical height and structure measurements of overflown terrain, including vegetation and ice.

The only data of its kind

Additional Lidar altimeters from the University of Texas and the University of Alaska-Fairbanks also formed part of Operation IceBridge, with the latter designed to be compact enough to be installed on the smaller aircraft also deployed by the project when necessary.

Mapping instrumentation to create detailed photographs of the polar ice and measure its temperature included the Digital Mapping System (DMS), a digital camera platform that captures images of terrain at 21-Mpixel resolution and creates mosaics of those images. Different thicknesses of sea ice form a spectrum of colors and shapes, and DMS imagery was used during Operation IceBridge over Antarctica to detect areas of open water so that the thickness of the surrounding sea ice could be calculated.

Gravimetric and magnetometric instruments completed the IceBridge instrument package, gathering the data needed to allow analysis of areas where the use of Lidar or Radar was not possible.

IceBridge finished its last polar flight in November 2019, having by then completed more than 900 flights between Greenland and Antarctica, along with more than 150 in Alaska, where a final mission will be flown in 2020.

NASA believes that the data set generated by these missions and their optical instrumentation will remain valuable in the future, and is for now the only data set of its kind for scientists to study.

"Our data is freely available to anyone,” said project manager Eugenia De Marco. "I believe IceBridge and the data it has collected helps answer the question of what’s going on with the physical world, and that is one of the biggest contributions IceBridge has provided over the years."