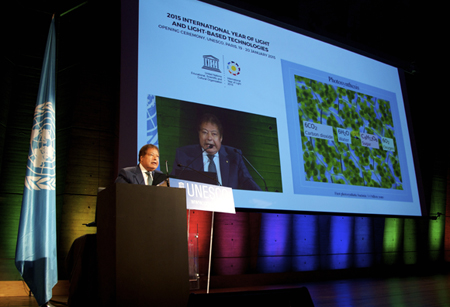 Professor Ahmed Zewail, Professor of both chemistry and physics at Caltech.

The more than 1000 attendees at the launch of the UN-sponsored International Year of Light, in Paris - known as the "City of Light" - enjoyed a wide range of educational, political and entertaining presentations from various significant figures from contemporary photonics and related disciplines.

Professor Ahmed Zewail, the Linus Pauling Chair professor of chemistry and physics at California Institute of Technology, gave the plenary lecture entitled Light and Life. “From the Big Bang to the current state of the world, roughly 14 billion years on, we recognize that light plays a key part not only in all our lives today, but it has done so throughout the entire period of the evolution of earth and all of its life,” he told the gathering.

”Sunlight provides us with food, atmosphere and energy through the key reaction of photosynthesis, which converts carbon dioxide and water into sugar and oxygen, and so the essentials for us to live. Identifying this photonics-related reaction led to an earlier Nobel Prize for Melvin Calvin in 1961.”

As did several other presenters at the Paris event, coming less than two weeks after the nearby murders of Charlie Hebdo journalists, public and a police officer, Zewail acknowledged and deplored the attack. He then stressed to the audience that all cultures and religions throughout history have tried to discover the origins and importance of light, invariably making it a key part of their cultures.

“Many of the ancient civilizations, whether Chinese, Buddhist, Hindu, Jewish, Muslim, Christian have from early days worked to gain understanding of our relationship with light. Early Egyptians Akhenaten and Nefertiti were some of the first worshippers of the sun, who recognized the importance of our fundamental power source.”

Adjacent to the main conference hall in the UNESCO building was a substantial new display commemorating the 1000 years since Egyptian Ibn Al-Haytham wrote his Book of Optics, which included chapters on early research into color, visual perception, reflection and refraction.

Zewail concluded by calling for the application of greater investment and training – to alleviate people in need around the world, who suffer from poverty, lack of education and political exploitation. “Globally, we need to see investment, leadership and, above all, vision,” he said. 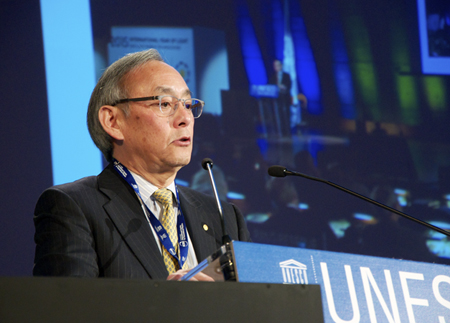 Chu acknowledged the earlier work of James Clerk Maxwell, who almost exactly 150 years ago brought together the ideas of electricity, magnetism, and light as manifestations of the same phenomenon. “Nowadays, with the benefits of scientific developmental work by the likes of Maxwell, we are working with electromagnetic radiation across more than 24 orders of magnitude.

”At the one extreme, 100Hz is rather slow for data transmission although it still exceeds the amount of useful information that the average politician can speak, “ he joked. He reminded that audience that ocean temperature data showed a general increase from earliest recorded data from 1860 through today’s satellite-gathered data. “Fourteen of the 15 hottest temperatures that we have ever recorded have occurred in the 21st century – and we have only had 14 years of records in the 21st century.”

Chu also spoke about some of his recent photonics-related work, which has been concerned with combining improving microscopy resolution to sub-nanometer sensitivity with video techniques to better understand molecular interactions. “The ability to achieve sub-nanometer resolution in biological environments has the potential to revolutionize biology, particularly structural biology," he said. "One of the motivations for this work, for example, was to measure distances between proteins, such as the protein assembly in human RNA mechanisms, which initiate DNA changes.” 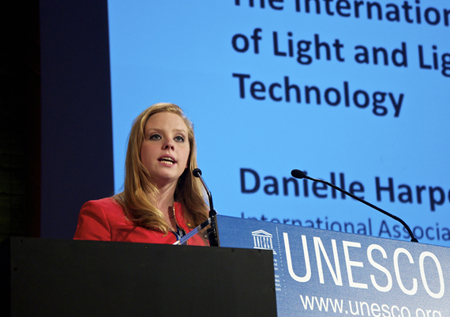 Danielle Harper of the International Association Of Physics Students.

Other presentations among the several dozen over the two-day launch, comprised short “thematic messages” from diverse members of the global scientific community, intended to reinforce the diversity and international nature of the planned IYL events during 2015.