University of St Andrews project could be used to monitor effects of environment on TB. 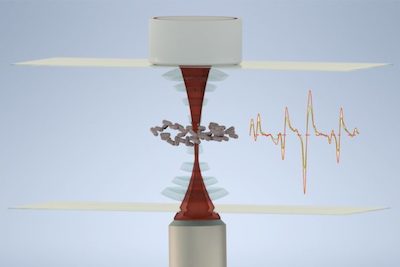 Studying microorganisms and their changing composition can be challenging, often requiring repetitive sampling techniques which themselves affect the target organisms.

A method to capture and examine bacteria without altering them would be a better solution, and a project led by the University of St Andrews has now developed such a technique, using a microfluidic platform and wavelength modulated Raman spectroscopy (WMRS) to examine a model of tuberculosis bacteria.

TB presents a significant public health challenge in several parts of the world, with increasing evidence that the presence of lipid bodies in TB cells has a direct influence on the response to antibiotic treatments. The higher the amount of bacteria having lipid inclusions, the greater the resistance to antibiotics.

The new St Andrews platform integrates optical Raman spectroscopy and acoustic trapping of M. smegmatis bacteria, a model organism for TB, to assess their response to antibiotic treatment. It could now be applied to the study of other microorganisms, to dynamically monitor how they respond to different conditions and stimuli. The findings were published in the Nature journal Communications Biology.

The principle behind the new technique involves using acoustic trapping to levitate and immobilize living bacteria in a small microfluidic chamber, and then applying WMRS to recorded the bacteria's Raman signal, revealing the molecular composition of the bacteria.

"This is a first study to tackle the problem of studying infectious disease with lasers and sound," commented Mingzhou Chen of the university's Optical Manipulation Group. "We hope researchers will be able to use this innovative way to look at living bacteria and beyond."

In trials, a confocal Raman system operating at 785 nanometers was used to target bacteria acoustically trapped in the project's bespoke 120-micron microfluidic channel. About 100 mW of laser was applied at the sample plane, to obtain sufficiently strong signals without disturbing the acoustic trapping.

Several distinct Raman spectral peaks related to the presence of particular lipids and proteins were monitored, both with and without the presence of isoniazid (INH), an antibiotic commonly used to treat TB.

"A key advantage of the approach is the significant reduction in background signal achieved by holding the bacterial sample away from device surfaces with acoustic levitation," commented the team in its published paper. "This creates a new platform for real-time interrogation of bacteria, and allows the biochemical effect of dynamic changes in nutrients and antibiotics to be studied."

Results from the M. smegmatis samples revealed the complex nature of the Raman spectra from such microorganisms, with factors such as aggregation of the bacteria in close proximity also having an influence on the spectral signals. But the project was able to observe a distinct pattern of changes to the Raman peaks under the influence of INH, including changes to those specifically associated with lipids.

Further research is required to fully understand the effect that the acoustic trapping has on the bacterial population, but the team believes that it has already demonstrated the potential of its platform to help understand the behavior of bacteria, as a route to deciding the best methods to treat them.

As well as being able to monitor the response to antibiotics, it could also be used to examine the influence of environmental changes such as pH, temperature, oxygen concentration and nutrient starvation, according to the project.

"This new tool will help us to understand why TB treatment takes so long, and could be a platform for testing new drugs," said Stephen Gillespie of the University of St Andrews School of Medicine.