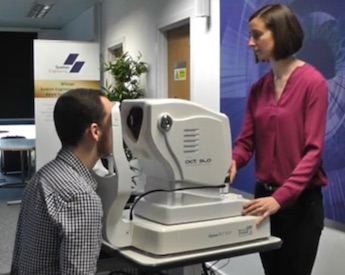 "Over the last 36 months the project has had a major impact on the development of UHR-PS-OCT, from advances in components to automated algorithms to process the results," commented G&H announcing the project's conclusion.

"Galahad has been very successful in developing components, sub-systems, operational systems, processes and software related to OCT, and has achieved some important results in applying them to glaucoma screening."

The project was formed to address shortcomings in current screening and diagnosis of glaucoma, and the lack of optical technologies able to provide in-depth analysis of damage to the optic nerve. OCT is a widely used technique for ophthalmic imaging, but is limited to 3 to 5-micron resolution in commercial systems, rather than the 1-micron resolution needed for complete glaucoma diagnosis.

The consortium set out to develop a suitable UHR-PS-OCT platform by combining an economic multi-band supercontinuum light source; broadband photonic components required to exploit such a source; and automated glaucoma screening algorithms.

The Galahad report indicated that "use of new and optimised etch processes is expected to have a strong positive impact on Ibsen's manufacture of transmission gratings, allowing expansion of its world-leading position in gratings for OCT, but also for telecommunication, high power laser, and LIDAR applications."

Imaging of rats and human retinas

An automated algorithm developed by the Universitat Politècnica de Valènci (UPV) proved capable of distinguishing between healthy and glaucomatous eyes with an accuracy of 0.81, sensitivity of 0.79 and specificity of 0.82, making use only of OCT volumes focused on the optic nerve head of the retina. Image analysis methods termed Class Activation Maps were used to identify the regions monitored by the deep-learning network for classification.

This level of sensitivity was found to be within the range of commercial supercontinuum-based OCT systems, but more importantly the axial resolution was found to be below the key 1 micron threshold in tissue, making the Galahad OCT system capable of resolving single cells in the area of interest. This resolution was said to be possible through careful resampling and correction of the unbalanced dispersion introduced within the Michelson interferometer of the OCT system, and was described as setting "the new state-of-the-art for PS-OCT systems" by the project.

"This went significantly beyond the planned project scope, and was a highly satisfactory conclusion to the project," noted the final Galahad report.