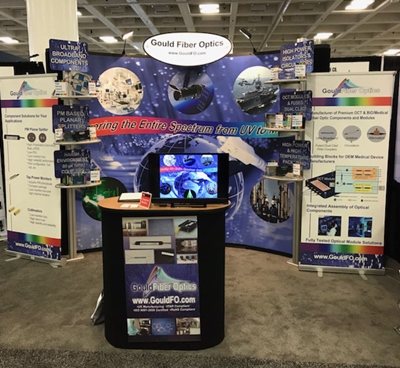 London-listed optics company Gooch & Housego (G&H) has completed another significant acquisition as part of its diversification strategy – this time with a deal to buy US-based Gould Fiber Optics (GFO).

Worth up to $16.4 million, the agreement should enhance G&H’s position in the aerospace and defense sectors, particularly in regard to the important US market.

Military focus
Founded in 1978 and headquartered in Baltimore, GFO specializes in the design, development and manufacture of fiber-optic components and subsystems, and is said to provide key components to some top-ranking US aerospace and defense customers.

“The GFO product range is highly complementary to that of G&H,” announced the UK firm. “Whilst G&H is the leading manufacturer of high-reliability undersea fused fiber-optic components, together with a strong presence in the life sciences and fiber laser markets, GFO specializes in the supply of polarization-maintaining fiber components to the US defense market.”

The deal will also give G&H an important route to market that it has been largely denied previously, because of strict International Trade in Arms (ITAR) regulations.

According to the GFO web site, the company also sells components and modules used in optical coherence tomography (OCT) imaging applications, as well as for oil and gas exploration, and civilian telecommunications including fiber-to-the-home installations.

$40M credit facility
G&H is paying an initial $13 million to complete the acquisition, funded via the company’s recently agreed $40 million credit facility. The agreement also includes issue of new G&H shares worth $1.4 million, plus a further cash consideration of up to $3.4 million, depending on the performance of the business over the next year.

The acquisition price reflects GFO’s historical annual revenues of just over $6.3 million, with the company delivering an expected “underlying” operating profit of around $1.6 million when planned investments at the Baltimore site are taken into account.

In G&H’s statement to the London Stock Exchange regarding the deal, CEO Mark Webster said: “This acquisition enables us to take another step towards diversifying our business, allows G&H access to previously restricted markets, as well as reducing, still further, the company’s dependency on what remains a cyclical microelectronics sector.

“GFO is a high-quality business, with a long-standing tier-one aerospace and defense customer base, complementary technology and a strong financial track record. We are very much looking forward to working with the management, staff and customers of GFO.”

The latest expansionary move comes less than a month after G&H bought UK-based Integrated Technologies (ITL), giving it greater exposure to the medical device sector. That acquisition will cost the company up to $22 million.

In G&H’s most recent financial report – released in June – Webster noted that aerospace and defense sales now represented around one-third of the overall business. That proportion is set to increase as a result of the GFO acquisition, while the ITL deal should double the company’s sales into the life sciences sector.

The same financial report indicated that, prior to the ITL and GFO agreements, G&H held just over $16 million in cash on its balance sheet, alongside borrowings of $11 million.