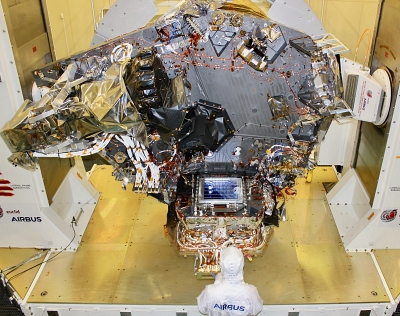 Engineers at the European Space agency (ESA) have integrated the optical and infrared imaging equipment within the payload module being readied for the “Euclid” mission to study the twin mysteries of dark energy and dark matter in space.

ESA said that the instrumentation, which includes a large CCD array from Teledyne e2v for visible-range observations, and a near-infrared spectrometer and photometer (NISP), recently passed qualification and acceptance reviews.

“This marks an important step forward in the assembly of the Euclid space telescope, which is scheduled for launch in 2022,” announced the agency.

Universe reconstruction
According to ESA, the visible-range (550-900 nm) and near-infrared (920-2000 nm) instruments will be able to measure the shapes and the red-shifts of distant galaxies and clusters of galaxies.

“This will enable scientists to reconstruct the past 10 billion years of the universe's expansion history, and investigate the mysterious dark matter and dark energy that are thought to dominate the universe,” it explained.

But before that happens, the payload module is scheduled to be shipped to Centre Spatial de Liège, Belgium, in April 2021, for tests on optical compatibility and performance in space-like conditions.

Once those tests confirm that the instruments are performing as expected, the payload will be shipped to Thales Alenia Space in Italy, and integrated into the finished spacecraft.

After another batch of tests there, Euclid will be transported to the ESA’s spaceport in Kourou, French Guiana, with launch anticipated in the second half of 2022.

Similar to the positioning of the James Webb Space Telescope, Euclid will make use of a so-called “Lagrangian Point”, around 1.5 million kilometers from Earth, in the direction away from the sun.

Galaxy shapes and red-shifts
Euclid’s visible-range instrument will be used to image the shape of galaxies, as well as gravitational lensing effects induced by large-scale cosmic structures of the universe on distant background galaxies.

“It will probe how the dark matter is distributed, and how its distribution changed over the last 10 billion years,” says the Euclid Consortium.

Critical to that capability is the instrument’s focal plane array, which comprises a 6 x 6 array of high-resolution CCD imagers that have been optimized for the Euclid mission.

ESA says that the Teledyne e2v array covers a field of view approximately 180 times wider than that of the Hubble Space Telescope.

Meanwhile, the NISP instrument will collect data that, when combined with the visible-range images, will yield accurate red-shift information. This will enable astronomers and cosmologists to derive more accurate estimates of the distances between different galaxies, and to produce a three-dimensional “map” of their positions within the universe.

“The NISP spectroscopic data will primarily be used to describe the distribution and clustering of galaxies, and how they changed over the last 10 billion years under the effects of the dark matter and dark energy content of the universe, and of gravity,” the Euclid Consortium explains.

A different division of Teledyne has provided the longer-wavelength detectors being used in the NISP instrument’s focal plane array.

• The laser altimeter on board NASA’s “IceSat-2” Earth observation satellite has measured a 32 meter average thinning of the giant A68-A iceberg - thought to be one of the largest icebergs ever seen.

Now breaking apart as it drifts close to the island of South Georgia in the southern Atlantic Ocean, the iceberg is thought to be shedding some 767 cubic metres of freshwater into the surrounding seawater every second.

The laser altimeter data suggests that A68-A has thinned by more than 50 meters in places, and has lost the equivalent of around a quarter of its initial thickness overall.