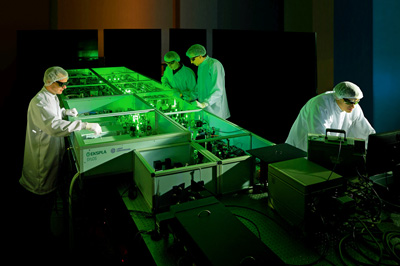 SYLOS3 will deliver at least 15 TW peak power at a 1 KHz repetition rate.

ELI-ALPS (Extreme Light Infrastructure Attosecond Light Pulse Source), the European research center, and a partnership between solid-state and fiber laser developer EKSPLA and femtosecond OPA specialist Light Conversion, have together signed a research and development contract to build a new laser system, called SYLOS3. It will be installed at ELI-ALPS, which is headquartered in Szeged, Hungary.

The new €6 million system is intended to deliver what ELI-ALPS describes as “unique parameters, never before achieved in a commercially available system.” It is specified to deliver more than 15 terwatts peak power at a 1 kilohertz repetition rate and less than 8 femtosecond pulse duration.

Compared to the existing SYLOS2A system, already installed at ELI-ALPS – which is specified to deliver 4.5TW, 6.3 fs, and at 1 kHz – the new system will provide more than three times higher peak and average powers.

“One of its many applications is the generation of isolated attosecond pulses for metrology. The beamlines operated with the SYLOS laser are designed for user operation and requires highly stable operation with a high up-time availability. These tasks will be the top priorities when designing and developing the SYLOS3 system.”

Due to the exceptionally large XUV/X-ray energy, this new system will provide a route to nonlinear XUV and X-ray science as well as 4D imaging and industrial, biological and medical applications.

The stated objective of the ELI-ALPS project is “to create a unique European research center, providing the international research community with exceptional laser pulses and secondary sources. The Szeged facility stands out from the institutes producing the highest intensity laser pulses in the world at 1 kHz pulse repetition rate.”

Kestutis Jasiūnas, EKSPLA CEO, added, “Unlike other terawatt level systems available in the market, which are operating at single shot or low frequency regimes, the new SYLOS3 system will be running at a 1 kilohertz repetition rate.”

“This approach will enable researchers to collect much more data and raises experiments to the next level. Armed with such tools researchers also will be able to step from fundamental into the applied science experiments area and develop promising future technologies like a laser based particle accelerator.” 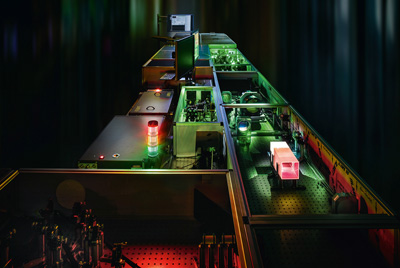 Installation of SYLOS3 is scheduled for the end of 2022. Above: SYLOS2.

The SYLOS3 laser system will be based on OPCPA (Optical Parametric Chirped-Pulse Amplification) technology. Developed at Vilnius University, OPCPA is said to be the leading method for generating high intensity radiation as it prevails compared to conventional (Ti:Sapphire laser-based) femtosecond technology in terms of pumping efficiency, contrast, bandwidth, and as a consequence, the degree of control of the generated radiation.

“Despite being highly complex, the new system will ensure exceptional stability,” said Martynas Barkauskas, CEO, Light conversion. “SYLOS3 will deliver around 120 mJ pulses with less than 250 mrad CEP stability and energy stability of below one per cent.”

To ensure reliability, SYLOS3 will be designed and built from scratch. All manufacturing will be carried out in Vilnius, Lithuania. Delivery and installation is planned for the end of 2022.