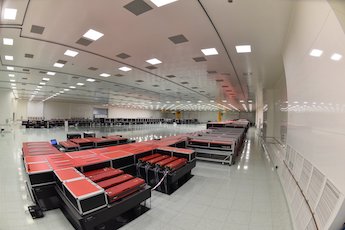 Nearly six years after the start of construction, the Extreme Light Infrastructure for Nuclear Physics (ELI-NP) facility at Magurele, Romania, has hit a milestone figure in the output of its ultra-high intensity laser system.

The source has been developed by Thales, which commenced delivery and installation of what is said to be the world's most powerful laser system in late 2016. Since the start of 2019 the project has initialized and progressively scaled-up the system's output to increase its pulse energy and peak power level.

After demonstrating pulse energies of seven petawatts for more than four hours continuously, according to Thales, the system generated its first pulses at a power level of 10 PW earlier this month, described as an unprecedented level of performance.

"The completion of this unique scientific equipment at the assumed parameters confirms that ELI-NP is a successful project, a landmark in the history of science, and paves the way to top-level international experiments in Magurele," commented the project in its announcement.

Gérard Mourou, a prime mover of the ELI-NP project and a 2018 Nobel prize winner for his work on high-energy laser pulses, said that "10 PW is a tenfold leap from the power level demonstrated at the start of the project. It’s been a huge challenge for Thales and Romania, on a par with a lunar landing, where failure is not an option."

According to the ELI-NP roadmap, 10 PW beams are intended to be available for use in the project's research program in the first quarter of 2020.

The Magurele facility is one plank of the Extreme Light Infrastructure project, a European initiative intended to collectively deploy the most intense laser beamline system available worldwide. To that end, ELI-NP will be joined by ELI-Beamlines in the Czech Republic, and ELI Attosecond Light Pulse Source in Hungary. A fourth facility, potentially the most powerful system of all, is also planned, but at a location yet to be decided.

The laser source at ELI-NP is eventually intended to deliver focused laser intensities of up to 1023 watts per square centimeter, at a wavelength of 820 nanometers and pulse lengths of 25 femtoseconds. A beam diameter of 50 centimeters is ultimately envisaged. This formidable laser capacity will allow experiments in high-energy physics to be carried out under extreme conditions, potentially including nuclear fission and fusion, and acceleration of electrons to more than 10 GeV.

Alongside the Thales laser system, ELI-NP is due to employ an equally ground-breaking gamma beam source, in which gamma radiation will be produced via Compton back scattering of intense laser light. However, this aspect of the project has hit a snag.

The consortium handling installation of the gamma system, EuroGammaS, is at the center of a legal dispute over delays in construction and installation dating back to 2014. EuroGammaS has sought to renegotiate its contract after claiming that the ELI-NP building was "not compliant" under the terms of the original deal.

The dispute has been in the hands of the courts since October 2018, with implications for all parties involved and the work schedule of the ELI-NP project itself.

Last month Romanian politician and EU Commissioner for Regional Policy Corina Crețu intervened via Facebook to express "concerns about the latest evolutions at the ELI project," and suggest that the legal dispute over the gamma side of the facility endangered the completion of the overall endeavor.