Successful culmination of year-long installation of the L1-ALLEGRA laser, the L1-E1 beam transport, and of the HHG beamline near Prague. 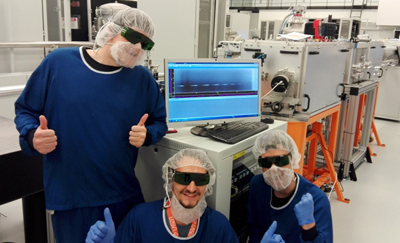 At the ELI Beamlines research center (part of the European Light Infrastructure initiative), near Prague, Czech Republic, the laser team and the E1 experimental team have just reported an “important milestone” in their technology integration. The first joint experiment on generation of high-order harmonics (HHG) in the HHG Beamline in E1 hall with L1-ALLEGRA laser driver has been successfully performed.

This experiment was a culmination of a year-long installation of the L1-ALLEGRA laser, the L1-E1 beam transport, and of the HHG beamline, which were integrated into one system for user experiments.

In this first integrated test experiment, the ALLEGRA laser front-end output was propagated through the whole system and compressed in vacuum by chirped mirrors resulting in the following laser output parameters: pulse energy of 1.4 mJ; pulse duration of 14 fs; central wavelength of 830 nm; and a repetition rate of 1 kHz.

The beam was then propagated though the E1 vacuum beam transport delivering it to the HHG beamline. There it was characterized and focused into a 20mm-long gas cell. Good pointing stability was measured, “which is a crucial feature for pump-probe experiments with tight focusing,” commented the research teams. 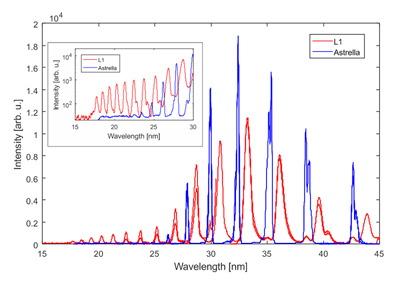 Spectrum of the high order harmonics generated (click for info).

The harmonic generation performance of the L1 beam was compared to the previously available commercial laser driver (such as Coherent’s Astrella: 5 mJ, 40 fs, 1 kHz) used in E1. The L1 driven spectrum was found to have higher efficiency below 30 nm and to be able to generate shorter wavelengths (see graph, left).

The experimental team say they will continue with the research and development of the kHz X-ray sources in E1, namely the plasma X-ray source, which can generate 10 keV radiation in sub-picosecond pulses.

The ELI Beamlines research center aspires to install and run the world's most intense laser system. With ultra-high peak powers of 10 petawatt and focused intensities up to 1024 W/cm2 the center is expected to offer new and unique sources of radiation and particle beams for its users. These beamlines will enable groundbreaking research not only in the fields of physics and material science, but also in biomedical research and laboratory astrophysics.

ELI Beamlines is part of the Extreme Light Infrastructure (ELI) project, a new Research Infrastructure of pan-European interest and part of the European Strategy Forum on Research Roadmap . ELI is a multi-sited Research Infrastructure with complementary facilities located in the Czech Republic, Hungary, and Romania for the investigation of light-matter interactions at the highest intensities and shortest time scales. The laser intensity will be more than six orders of magnitude higher than today’s state of the art.