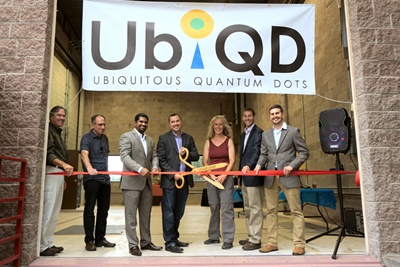 UbiQD, an early-stage producer of cadmium-free quantum dots based in Los Alamos, New Mexico, has won a $225,000 grant from the National Science Foundation (NSF) to work on optical coatings for generating power from glass windows.

Awarded at the end of June, the Phase 1 grant will support the development of windows able to absorb sunlight and re-emit fluorescence at a longer wavelength towards solar cells at the edge of the window.

According to the NSF grant abstract: “This technology hasn't been commercialized yet because previous tint materials typically absorb their own emitted light, limiting efficiency. This project aims to provide a solution to these problems with a novel low-cost window tint material made from quantum dots.”

The quantum dots in question are free of toxic cadmium, the metal typically found in such nanoparticles. Instead, UniQD is working with CuInSeS/ZnS material, said to be both significantly cheaper than CdSe or InP alternatives, although perhaps more importantly with the kind of near-infrared fluorescence that is desired for low-cost solar cells, without causing self-absorption.

“In this SBIR Phase I project CuInSeS/ZnS quantum dots will be optimized for higher photoluminescence efficiency (greater than 50 per cent) and applied as industry-compatible coatings to glass substrates for higher performance,” concludes the abstract.

‘Large opportunity’
UbiQD founder Hunter McDaniel said the award would allow the fledgling company to focus on a particularly large market opportunity. “Our vision is to turn ubiquitous, everyday windows into sunlight harvesters. Think of skyscrapers that power cities,” he added.

The quantum dot technology set to feature in those windows was originally developed at the Los Alamos National Laboratory and the University of Milano-Bicocca in Italy, and was recently licensed by UbiQD.

Until winning the grant, the company had been looking at a variety of potential applications in lighting, security, and other markets, but says that it will now focus primarily on the solar window opportunity.

As recently as last month, UbiQD moved into a newly renovated 9000 ft2 facility in Los Alamos, with the aim of scaling up its manufacturing capacity.

Heading up the manufacturing side is new employee Karthik Ramasamy, who gained a PhD under the supervision of University of Manchester, UK, professor Paul O’Brien – the founder of cadmium-free quantum dot specialist Nanoco Technologies.

Just this week Nanoco announced a licensing deal with chemicals giant Merck that could herald a huge expansion in production of the nanoparticles for display applications.