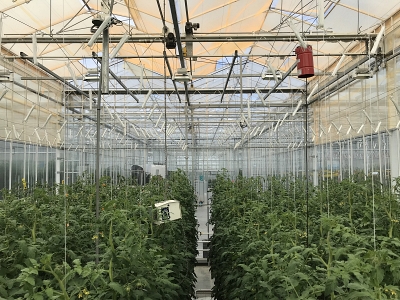 The 2-year effort will see the Los Alamos spin-out collaborate with the University of Arizona's Controlled Environment Agriculture Center (UA-CEAC) to tailor the spectrum of sunlight for optimized crop growth on space missions.

The latest award represents a follow-up to the $125,000 Phase I STTR contract UbiQD won in August 2018, and is part of NASA's wider strategic effort to advance food production capabilities in orbit and on planetary missions.

Lettuce yields up
UbiQD says that the initial results of that effort have shown success, with improved crop yields for vegetables grown under a xenon lamp modified with a UbiQD film that converts ultraviolet photons to longer wavelengths.

Gene Giacomelli, the Arizona professor who is heading up the work at UA-CEAC, said in a company release: “On long-duration space missions, where astronauts will need to make the most use of resources, boosting food production with this technology could be a 'game-changer'.

“There is definitely something positive in this material, as well as the technology which UbiQD has implemented. I'm on their horse in this race."

Although initially focused on photovoltaics applications of their CuInSeS/ZnS materials, which have the advantage of being cadmium-free, UbiQD has been working on agriculture applications for the past couple of years.

Its UbiGro film is designed to accelerate plant growth, and the company has partnered with commercial greenhouses to install the technology in 15 locations across six countries and five US states, including The Netherlands (see image above).

Wavelength shift
One example is Growing Opportunities, based in Alcalde, New Mexico, which is using the approach to increase the fresh weight yield of tomatoes. Just last month the company released the first commercial data from its farm, showing a 20 per cent yield improvement made possible by the film.

It has also been trialed at cannabis farms in California and Oregon, with the films said to have boosted production by 5-8 per cent (weight) in studies involving more than 450 plants.

UbiGro works by converting sunlight into a longer-wavelength, orange hue, that is said to mimic the light of late-summer sunshine - thought to be the optimum color combination because it triggers faster growth by mimicking the impending onset of winter.

“The quantum dots shift shorter wavelength colors, like UV and blue, towards the red which is more efficient for photosynthesis,” explains UbiQD.

The company’s “chief product officer” Matt Bergren said of the latest STTR funding: “We are thrilled to continue our work with the University of Arizona and NASA to improve the light quality for plants grown in space.

"Our technology could not only help provide fresh fruit and vegetables to future astronauts on missions to the Moon or Mars, but also benefit growers here on Earth."

Ultimately, the goal of the NASA project is to install the UbiQD down-conversion film into the solar collecting/fiber optic system of the space agency’s prototype “Mars-Lunar Greenhouse”.