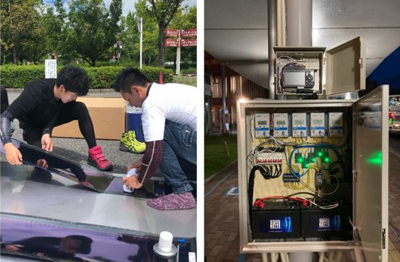 Heliatek's OPV project in Japan on a bus stop at Ritsumeikan University.

Towards the end of 2019, organic photovoltaic (OPV) thin film solar panel developer Heliatek was announced as one of three winners of the Japan Energy Challenge 2019, a competition hosted by Japanese company SMAP Energy.

Now, one year later, Heliatek has realized its first project in Japan in cooperation with Looop Inc. and Ritsumeikan University.

The installation was realized on a bus stop located on the Biwako-Kusatsu Campus of the University in the Shiga Prefecture, near Kyōto. Prototype HeliaSol solar films were glued on flat and round shaped metal substructures, which were then mounted on the roof of the bus stop.

Takahito Nishimura, Assistant Professor of the Ritsumeikan-Global Innovation Research Organization, commented, “Solar modules using thin-film are a superior design compared to conventional solar panels based on silicon in terms of weight and flexibility, and therefore can be installed on buildings with load limitations or walls with curved shape.

“This outdoor experiment will reveal how a curved installation of the flexible organic solar films will affect the amount of electricity generated and how to maximize it.”

Guido van Tartwijk, CEO of Heliatek, added, “We are proud to have realized the first project with our organic solar film in Japan. We see a huge potential for our innovative solar films in this country.

“Due to land restrictions and the high degree of urbanization, Japan has to look for new ways to generate clean and sustainable energy. Our films are lightweight, flexible and truly green – making them a perfect fit for these challenges.

“The Japan Energy Challenge 2019 enabled us to get access to a network of valuable partners that now help us bringing our new technology to Japan. We are excited about the various opportunities in Japan and thank all our partners and supporters to help us on that way.”

Looop is a Japanese company that is promoting renewable energy sources in Japan. The company operates a low-voltage power retail business called Looop Denki, with about 250,000 users and is offering new services to attract smart energy consumers.