Nantes-based Armor Group says that its light, flexible energy-generating films will be on sale shortly. 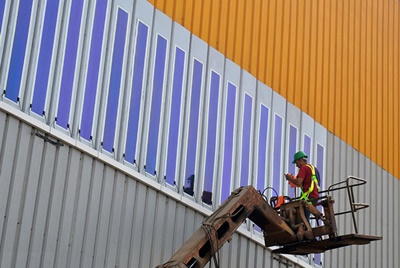 Armor Group, a company in France that specializes in roll-to-roll printing, says that it is poised to enter the nascent market for organic photovoltaic (OPV) films, after a claimed €40 million, six-year investment in technology development.

The Nantes-based firm, which has thus far concentrated on laser-printed labels, thermal transfer and inkjet cartridges, has been working alongside the likes of German chemicals company Merck, which has supplied photoactive polymers, and several leading French research institutes.

Ready to roll
Although it has not revealed important technical details such as the efficiency or likely cost of its “ASCA” OPV film, the company does say that it weighs just 500 grams per square meter, and that it has an annual manufacturing capacity of 1 million m2 readied to start on its roll-to-roll equipment in January 2017.

“The first ASCA films are ready to be released and their applications will be progressively unveiled during 2017,” it announced.

The development comes less than a month after another OPV developer, Germany-based Heliatek, revealed that it had secured an €80 million financing deal underpinned by the European Investment Bank that will enable it to scale up its annual production capacity to the same 1 million m2 level.

Where Armor may have an advantage is in its existing scale and experience with roll-to-roll printing: the company says that, overall, it already produces more than 1 billion m2 of thin-film material annually.

And according to financial documents, Armor’s sales revenues and profitability have also grown healthily in recent years, with turnover reaching €235 million in 2015. The company employs 2000 people overall, and has a strong presence in Asia and North America, alongside six locations in Europe.

Thermal transfer
In fact, Armor’s technological heritage goes back nearly a century. Initially focused on carbon paper, the Armor name was coined as long ago as 1925. In the 1980s it pioneered the development of thermal transfer technology, and in 1990 opened the La Chevrolière manufacturing facility where the ASCA films will be made.

2010 saw the start of the “OSCAR” (organic solar cells by Armor) research and development program on OPV, before a management takeover in 2014 resulted in Hubert de Boisredon taking charge of the company.

The R&D stage has involved a multidisciplinary team of 30 scientists and engineers, with contributions from teams at the Centre National de la Recherche Scientifique (CNRS), the CEA-run National Institute for Solar Energy in Saclay, and the Laboratoire de Chimie des Polymères Organique (LCPO) in Bordeaux.

Also involved are the French companies Amcor and Adhex, as well as US-based Cambrios Advanced Materials, which has supplied silver nanowires.

Armor says that it expects the ASCA films to find use in both static “street furniture” and mobile applications such as charging personal electronic devices. It has set up a “design office” dedicated to developing custom applications, and plans to unveil a variety of initial applications throughout next year.