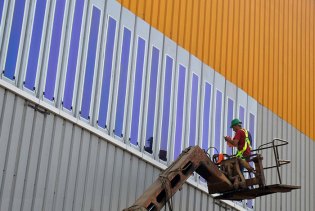 Heliatek, the Dresden-based developer of photovoltaic (PV) systems, has announced the implementation of a building-integrated organic photovoltaic (BIPV) pilot project in the Egyptian capital Cairo.

It represents the company's first BIPV project in Africa, as well as a test-bed project for further similar installations in the future by project partner and leading Egyptian steel supplier Kandil Steel.

HeliaFilm technology was described as being at the core of the Cairo installation, which employs the flexible PV material in custom lengths of 2.5 meters. Adjustments to the absorber molecules and the thickness of the various active and conductive layers in HeliaFilm can modify the color and transparency of the product, and in Cairo it will be utilized in both opaque and blue coloration.

Further development of the HeliaFilm technology is under way in Dresden, and Heliatek has said that it intends to establish a high volume manufacturing line for the product by 2018.

Efficiency record
"I am happy that we are progressing on our global roll out," said Heliatek CEO Thierry Le Séguillon. "It is a key step forward in our strategy of providing de-centralized energy generation solutions used directly on buildings all over the world."

For its part, Kandil Steel is known to be focusing on new solutions for distributed energy generation because of rising energy prices and declining government subsidies in its territory, where the climate conditions should be ideal for HeliaFilm-based cells. Kandil now plans to establish the combination of its steel panels with HeliaFilm as a new product for the BIPV market.

Heliatek, spun off in 2006 from the Technical University of Dresden and the University of Ulm, has already deployed HeliaFilm at PV installations in Europe - notably as part of the continent's first solar concrete wall at the German corporate headquarters of architectural concrete specialists Reckli, commissioned in May 2015.

At the time Heliatek commented that "about 130 million square meters of concrete facades are installed every year worldwide - this is our target market."

Outside Europe, HeliaFilm was used in the company's pilot PV project in Singapore in September 2015 which saw 30 square meters of the OPV film installed on the Seletar walkway at the Asian nation's airport. The average cell efficiency in that context was said by Heliatek to be 7 percent.

Heliatek's PV technology has surpassed that figure considerably in a laboratory setting, where a new benchmark for organic PV efficiency of 13.2 percent from a multi-junction cell was announced by the company earlier in 2016.

Further refinements could push this figure higher, with Heliatek's road map envisaging a 15 percent efficiency value for organic solar cells, based on its proprietary manufacturing approach of vacuum deposition of small molecules onto plastic films.