Ruhr-University Bochum and partners develop structures that react to presence of harmful molecules. 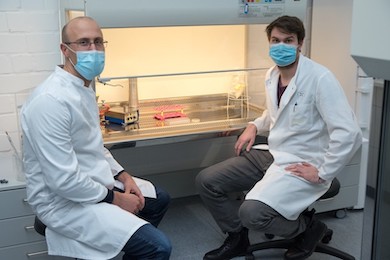 A new method for detecting bacteria and infections could reveal the presence of harmful pathogens more rapidly than existing techniques.

Developed by a team including Ruhr-University Bochum, the University of Göttingen, and Fraunhofer IMS, the technique is based on nanotubes that fluoresce in the near-IR range. The study was published in Nature Communications.

Although the concept of using nanomaterials as biosensors has been the subject of much recent research, remote optical detection of bacteria with the selectivity and sensitivity needed for effective clinical use is said to have remained a challenge.

"The sensor requirements for the detection of bacteria are very high, because infections or contaminations are a highly complex biochemical process," noted the team in its published paper.

"Additionally, one sensor alone could not be selective enough. Therefore fast and contact-free local detection without extensive sample taking and processing could advance the field of personalized pathogen diagnostics."

The project's solution is based on semiconducting single-walled carbon nanotubes (SWCNTs), whose novel optical and electrical properties are already attractive for a number of applications, including photovoltaics and environmental monitoring.

SWCNTs are known to capable of fluorescing in the the near-IR regime, opening up biophotonics applications thanks to the potentially decreased absorption and scattering of light from such structures within living tissues, plus ultra-low background fluorescence.

The fluorescence behavior of SWCNTs can also be altered by the presence of certain molecules in their environment, a phenomenon the new project intended to exploit. Conjugating carefully selected peptides onto the SWCNTs would allow the synthesis of nanotubes designed to be affected by bacterial metabolites and virulence factors, such as the presence of cell wall components, chelating molecules, and enzymatic activity.

The project envisaged incorporating modified fluorescent nanosensors into a polyethylene glycol hydrogel array, on which bacteria could be grown. When molecules released from the bacteria reached the SWCNTs, the sensor array's near-IR spectral fingerprint will be altered in ways characteristic of the particular pathogens.

Detection of infections on intelligent implants

"The fact that the sensors work in the near-IR range is particularly relevant for optical imaging, because in this range there are far fewer background signals that can corrupt the results," says Sebastian Kruß of RUB. "Since light of this wavelength penetrates deeper into human tissue than visible light, this could enable bacteria sensors to read out even under wound dressings or on implants."

In trials the team integrated nine nanosensors into a hydrogel array, creating a spatially encoded sensor pattern intended to produce a near-IR fingerprint of bacterial activity after suitable data analysis of the spectral output.

The project also employed chirality-purified SWCNTs so that multiple sensors could be spectrally encoded as well, at 900, 1000 and 1250 nanometers, and used for hyperspectral differentiation of important bacteria.

Tests using six of the most prominent bacteria responsible for post-surgery infections in artificial joint implants showed that remote near-IR imaging from more than 25 centimeters away from the hydrogel could successfully identify and distinguish the bacteria. In addition the spectrally encoded sensors allowed differentiation of two major pathogens, P. aeruginosa and S. aureus, at depths above five millimeters.

Further development could see a multiplexing approach, using different near-IR fluorescent nanosensors to enable not only remote detection and differentiation of important pathogens, but also the development of smart surfaces for clinical applications.

"In the future, this could constitute the foundation for optical detection of infections on intelligent implants, as sampling would no longer be required," commented Robert Nißler from the University of Göttingen.

"It would allow the healing process or a possible infection to be detected quickly, resulting in improved patient care. But the possible areas of application are not limited to this. For example, improved rapid diagnosis of blood cultures in the context of sepsis is also conceivable in the future."