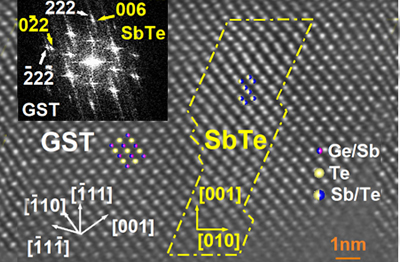 A multi-institutional team including researchers from the US National Institute of Standards and Technology (NIST) has developed an AI algorithm called CAMEO, which has identified a new material based on germanium-antimony-tellurium showing significant potential for photonics applications.

CAMEO is said to help reduce the amount of trial-and-error time scientists spend in the lab, while maximizing productivity and efficiency in product development research. The work is described in Nature Communications.

In the field of materials science, scientists seek to discover new materials that can be used in specific applications, such as a “metal that is lightweight but also strong, such as for building a car, or one that can withstand high stresses and temperatures for a jet engine,” commented NIST researcher Aaron Gilad Kusne.

Standing for Closed-Loop Autonomous System for Materials Exploration and Optimization, CAMEO can ensure that such experiments maximize a team’s knowledge and understanding, bypassing experiments that would give redundant information. But how does CAMEO help scientists to reach these goals faster and enable labs to use their limited resources more efficiently?

Method behind the machine

“The key to our experiment was that we were able to unleash CAMEO on a combinatorial library where we had made a large array of materials with all different compositions,” said Ichiro Takeuchi, a materials science and engineering researcher and professor at the University of Maryland.

Understanding how atoms are arranged in a material is important in determining its properties such as how hard or how electrically insulating it is, and how well it is suited for a specific application. “The AI is unsupervised. Many types of AI need to be trained or supervised. Instead of asking it to learn physical laws, we encode them into the AI. You don’t need a human to train the AI,” said Kusne. 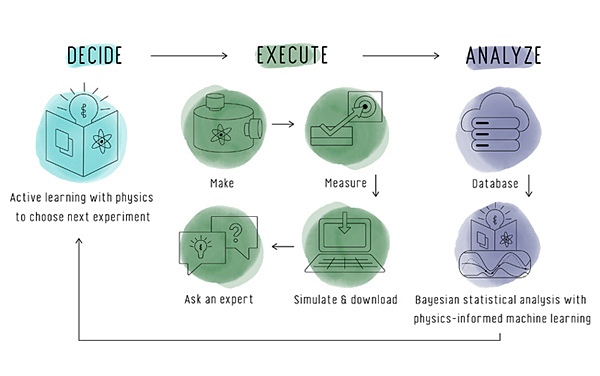 CAMEO searches for promising new materials by operating in a closed loop. Click for info.

One of the best ways to figure out the structure of a material is by bombarding it with X-rays – known as “X-ray diffraction”. By identifying the angles at which the X-rays bounce off, scientists can determine how atoms are arranged in a material, enabling them to figure out its crystal structure.

However, a single in-house X-ray diffraction experiment can take an hour or more. At a synchrotron facility where a large machine the size of a football field accelerates electrically charged particles at close to the speed of light, this process can take 10 seconds because the fast-moving particles emit large numbers of X-rays. This is the method used in the experiments, which were performed at the Stanford Synchrotron Radiation Lightsource (SSRL).

The algorithm is installed on a computer that connects to the X-ray diffraction equipment over a data network. CAMEO decides which material composition to study next by choosing which material the X-rays focus on to investigate its atomic structure.

With each new iteration, CAMEO learns from previous measurements and identifies the next material to study. This allows the AI to explore how a material’s composition affects its structure and identify the best material for the task. This approach is how CAMEO discovered the material Ge4Sb6Te7, which the group shortened to GST467.

This type of material is used in electronic memory applications such as data storage. Although there are infinite composition variations possible in the Ge-Sb-Te alloy system, the new material GST467 discovered by CAMEO is optimal for phase-change applications. 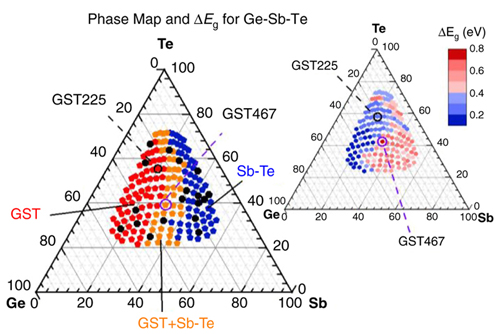 The researchers wanted CAMEO to find the best Ge-Sb-Te alloy, by which they meant the one with the largest difference in optical contrast between its crystalline and amorphous states. On a DVD or Blu-ray disc, for example, optical contrast allows a scanning laser to read the disc by distinguishing between regions that have high or low reflectivity.

They found that GST467 has twice the optical contrast of Ge2Sb2Te5, a well-known material commonly used for DVDs. The larger contrast enables the new material to outperform the old material by a significant margin.

GST467 also has applications for photonic switching devices, which control the direction of light in a circuit. These switches can also be applied in neuromorphic computing, a field of study focused on developing devices that emulate the structure and function of neurons in the brain – opening possibilities for new kinds of computers as well as other applications such as extracting useful data from complex images.

Another CAMEO benefit is providing the ability for scientists to work remotely. “This opens up a wave of scientists to still work and be productive without actually being in the lab,” said Apurva Mehta, a researcher at the SLAC National Accelerator Laboratory. This could mean that if scientists wanted to work on research involving contagious diseases or viruses, such as Covid-19, they could do so safely and remotely while relying on the AI to conduct the experiments in the lab.