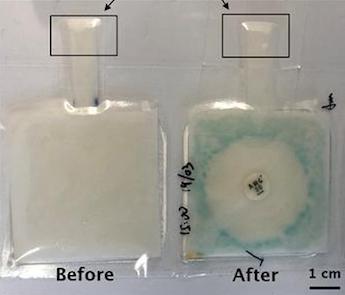 Developed by the University of Southampton, the new test is designed to speed up the identification of the bacteria, which can take days by conventional lab analysis, and indicate to doctors which antibiotic should be prescribed, if any. The work was published in Biosensors and Bioelectronics.

"By enabling doctors to quickly determine if an infection is caused by bacteria, and if the bacteria are resistant to four common antibiotics, this device could cut down on unnecessary antibiotic prescriptions and help fight the growing threat of antibiotic resistance," said Collin Sones from the university's Optoelectronics Research Centre (ORC).

Based on similar principles to existing pregnancy tests and urine dipsticks, the new technology is intended to be sufficiently robust and straightforward to allow doctors or nurses to apply it on the ward, greatly reducing the time taken to diagnose an infection.

The test device includes three layers of paper: a top layer containing four common test antibiotics in confined rectangular areas, an absorbent paper in the middle, and an agar gel-containing base layer, all sealed in a plastic casing.

When a liquid sample, such as urine, spreads across the middle paper layer, it comes into contact with the four antibiotics. If bacteria are present, the paper will turn blue; and if the infection can be treated with one of the antibiotics there will be a clear patch around the corresponding rectangle. Hence the test also indicates which antibiotic is appropriate for treatment.

The key development involves ways to ensure that the fluid flows to the correct areas, building on work already underway at ORC under the RAPID-TEST research project, a three-year program funded by the UK's EPSRC and due to conclude in November 2020 investigating point-of-care infection detection with laser-patterned microfluidic devices.

That research has already demonstrated a laser-direct write (LDW) method that can be used in the manufacture of lateral flow devices to control the flow paths of a liquid sample within porous media.

OFC has developed a LDW technique in which a liquid polymer is locally deposited onto a paper substrate at pre-defined locations. A 405-nanometer laser beam follows the deposition head and induces photo-polymerization, creating fluidic walls able to confine and direct a liquid subsequently introduced into the structure towards desired test locations.

This is said to be an improvement over previous and less localized manufacturing approaches to the same goal, in which the migration time of the sample towards the test area has been a fundamental limitation. Careful choice of laser parameters and polymer chemistry allows the dimensions of the fluid channels to be carefully controlled, hence influencing flow rates and the sizes of the test zones. Both these parameters are key to achieving increased sensitivities and lowered limits of detection.

The new results indicate "the suitability of our integrated paper devices for timely identification of bacterial infections at the point-of-care and their usefulness in providing a hugely beneficial pathway for accurate antibiotic prescribing," concluded the ORC research team.