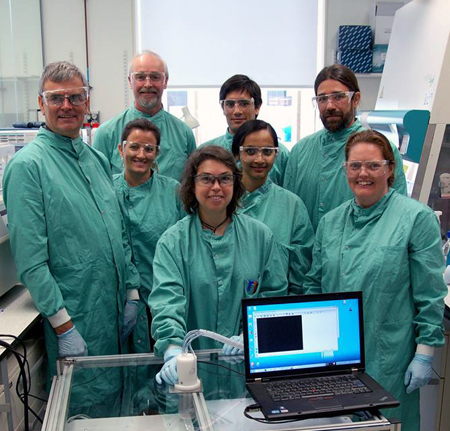 The Biolisme R&D team at Southampton.

An optical sensor designed to sample and detect foodborne bacteria is being trialled by scientists at the University of Southampton. The European Commission FP7-funded BioliSME project is using research from the University to develop a sensor capable of collecting and detecting the bacterium Listeria monocytogenes on food industry surfaces, thereby preventing contaminated products from entering the market.

Listeria monocytogenes is a pathogen that causes listeriosis, an infection with symptoms of fever, vomiting and diarrhoea, that can spread to other parts of the body and lead to more serious complications, like meningitis. Transmitted by ready-to-eat foods, such as milk, cheese, vegetables, raw and smoked fish, meat and cold cuts, this bacterium causes the highest hospitalisation (92%) and death (18%) rates among all food-borne pathogens. Listeriosis mainly affects pregnant women, new-born children, the elderly and people with weakened immune systems.

Current techniques to detect the bacteria require days of testing in laboratories, but the new Biolisme-developed device is expected to collect and detect the pathogen in situ within three to four hours. This early and rapid detection can avoid the cross contamination of ready-to-eat food products.

The new camera-like device is designed to sample single cells and biofilms – groups of microorganisms in which cells clump together on surfaces. Compressed air and water remove the cells before they are introduced to an antibody. If Listeria monocytogenes is present, the cells react with the antibody to produce a florescent signal, which is detected by the special camera.

Doctor Salomé Gião and Professor Bill Keevil from Southampton’s Centre for Biological Science Unit have been studying Listeria monocytogenes biofilms under different conditions and will be testing the new prototype. Gião commented, “We researched biofilms under different stresses to find the optimum pressure to remove cells from different surfaces, without disrupting the cells themselves. We also found that biofilms can form on surfaces even if they are covered in tap water. 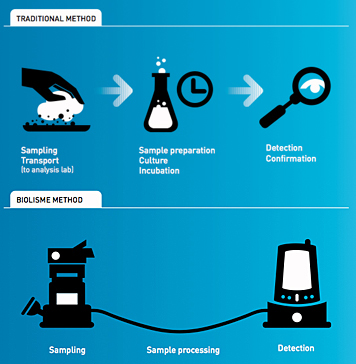 “The scientific research we have carried out at the University of Southampton has been used by our BioliSME project partners to develop a prototype device which will have major implications for the food industry. By making the process simpler we hope that testing will be conducted more frequently, thereby reducing the chance of infected food having to be recalled or making its way to the consumer.”

The prototype sensor has been finalised in France and field trials are now underway to test the device before it is demonstrated in food factories. A patent is pending with the Biolisme group hoping that it could be commercialized as soon as the end of 2014. José Belenguer Ballester, from project partner ainia centro tecnológico, added, “BioliSME has raised the expectations of food business operators because the devices being developed will allow rapid assessment of the cleanliness of manufacturing plants.”

The BioliSME project was started in 2009 by a consortium of six partners from four different countries and is funded by the EU’s Seventh Framework Programme for Research. Project partners comprise: Spain’s AINIA Technology Center , University of Southampton, Dublin City University, Photek, UK, Betelgeux, French firm 40-30 and the European Commission.

In an interview with optics.org, Doctor Gião explained more about the Southampton listeria camera-sensor, for which the partners have applied for a patent ahead of likely commercialization at the end of 2014.

Prototype sensor “The BioliSME prototype device, which is yet to be named, is an integrated optical biosensor device that collects and detects Listeria monocytogenes from food industry surfaces."

Replacing traditional methods "Traditional techniques are limited because recovery is low, results can be negative due to the presence of stressed bacteria and take days to be obtained. Our device uses compressed air and water to remove cells from surfaces, with high rates of recovery. The detection is based on an antibody that is specific for the Listeria bacterium. Results can be obtained in the same day."

Adaptation to test other bacteria "There is also the possibility of exploring the adaptation of this prototype to detect other types of bacteria in the future. Another benefit is that the Biolisme testing process seems to cost no more than the longer more complex testing methods that have been used so far.”