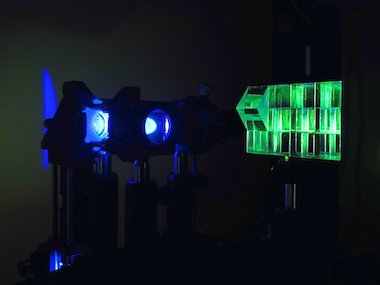 A new approach to acquiring images at different depths simultaneously using a standard microscope could be valuable in bioimaging studies of live cells and organisms.

The developers at Boston University believe that the platform, employing a microscope modified with off-the-shelf optical components, could be applied to a range of biological applications. The study was reported in Optica.

"Optical microscopy has been an indispensable tool for studying 3D complex biological systems and processes," said Sheng Xiao of Boston University. "Our new multifocus technique allows live cells and organisms to be observed at high speeds and with high contrast."

The Boston platform makes use of a low-cost and light-efficient multiplane-imaging prism called a z-splitter that splits the detection light path into a sequence of multiple paths, according to the project's published paper.

When the sequence of optical paths is directed onto a single high-speed camera with a large sensor area and high pixel count, each detection path effectively conjugates a different focal plane.

"In this manner, an axially distributed sequence of focal planes in the sample is simultaneously imaged in a single camera frame," noted the project team.

Being based on standard widefield microscopy means that the technique does not inherently provide optical sectioning of the sample being observed. However, as the system is imaging multiple focal planes simultaneously, suppressing out-of-focus background signals can enable quasi-optical sectioning.

The researchers used this approach to develop an improved 3D deblurring algorithm that eliminates the out-of-focus background light, a common source of problems in conventional widefield microscopy.

"A large portion of our work is devoted to the development and implementation of a novel extended-volume 3D (EV-3D) deconvolution strategy that explicitly extrapolates the reconstruction of the fluorescent sample beyond the volume actually spanned by the imaged focal planes," commented the project.

In trials, the platform was applied to different microscopy modalities including fluorescence, phase-contrast and darkfield imaging. Swapping in different z-splitter configurations allowed the project to prioritize high-speed or large 3D field-of-view imaging, depending on the application of interest.

Multifocus fluorescence imaging in a mouse brain demonstrated significant contrast and signal-to-noise ratio improvements compared to both raw multifocus images and more traditional 3D deblurring algorithms, according to the project. Similarly, imaging of freely moving C. elegans worms showed how the EV-3D strategy enabled fine details in the worms to be revealed with high contrast.

Applying the architecture to multifocus darkfield imaging, the team imaged a living Daphnia magna planktonic crustacean for 74 seconds at 30 Hz, exploiting the large 3D field of view (1.1 × 1.1 × 0.7 millimeters) to observe the animal without immobilizing it.

The researchers are now working on expanding the technique so that it will work with even more imaging modalities, noting that "simple modifications to the illumination or detection paths could also enable possibilities of spectral or polarization imaging in 3D."