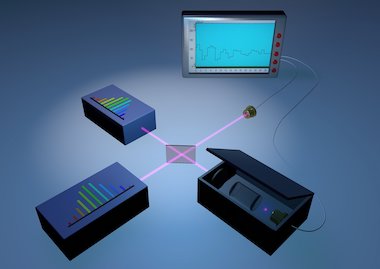 An architecture based around two frequency combs allowed single-photon counting at light levels that are a billion times weaker than commonly employed, according to the study published in PNAS.

"Unique advantages of the emerging technique of dual-comb spectroscopy, such as multiplex data acquisition with many comb lines and very high resolution, can thus be maintained for scenarios where only few detectable photons can be expected," commented the project in its paper.

Alongside a number of other uses, frequency combs have proven to be valuable tools in spectroscopy, where exciting a sample with such a comb can offer routes to the study of molecular structure and dynamics, or improve the performance of existing spectroscopy approaches.

Examples have included a University of Adelaide project developing a novel gas sensor, and "comb on a chip" research carried out at NIST investigating their use in clocks, telescopes and telecoms systems.

Using dual combs from two mode-locked femtosecond sources allows comb-enabled Fourier transform interferometry, with one comb interrogating a sample and a second of slightly different repetition frequency acting as a local oscillator. The resulting interference signal can be Fourier transformed to reveal a spectrum.

"Optical signals are effectively slowed down by a large factor," commented the MPQ researchers. "The unique advantages of this powerful spectroscopic tool include virtually unlimited spectral resolution."

The new platform's bespoke detection system, based around registering the central fringe of each recorded photon click, effectively reduced the incoming light power required to generate dual-comb spectroscopy data. This ultimately allowed the technique to be carried out in such low light levels that one click was registered over the time of 2000 laser pulses, on average.

MPQ characterizes this approach as "defying intuitive interpretations in a picture of photons that exist before detection." Since it is extremely unlikely that two photons, one from each laser, are present in the detection path at the same time, the Fourier calculation takes a photon's detection event as its start point and calculates the probability of that event.

The new proof-of-concept platform could potentially be used as a powerful spectroscopic tool, exploiting its spectral resolution, its suitability for use with an atomic clock, and its highly consistent acquisition of complex spectra without any need of scanning or mechanically moving parts.

"It may also be possible to extend the method to spectral regions where only feeble frequency comb sources are available, such as the extreme ultraviolet or soft x-ray region," commented Nathalie Picqué of MPQ.

"Spectroscopic signals can be acquired through highly attenuating materials or through backscattering over large distances. And it becomes feasible to extract dual comb spectra from nanoscopic samples down to single atoms or molecules, which produce only feeble fluorescence signals."