Caltech imaging technique could reveal dynamics of polarization and sonoluminescence. 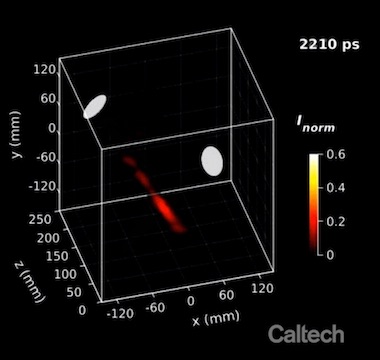 The latest achievement in ultrafast imaging, a field where advances in sensor performance and inventive optical design are regularly pushing boundaries, has allowed the 3D capture of transient optical species with picosecond resolution.

CUP captures a 2D transient optical event in a single shot through ingenious computational methods, first encoding the spatial domain of a visual image using a digital micromirror device, and then passing the signal on to a streak camera, designed to turn the time variations of a light pulse into a spatial profile on a detector.

This can effectively "shear" the temporal information and compressively record the entire light signal from a transient event on the camera's sensor, from where it can be reconstructed using appropriate algorithms.

The group has now extended the technology further, to the point where the platform can take up to 100 billion frames per second, and capture 3D information about exceedingly brief optical events. The enhanced technique is christened stereo-polarimetric compressed ultrafast photography, SP-CUP.

This enhancement of existing CUP techniques enables simultaneous and efficient ultrafast recording of polarization in three-dimensional space, according to Caltech. Compared with available single-shot ultrafast imaging techniques, it has advantages in light throughput, sequence depth, spatiotemporal resolution, and scalability in high-dimensional imaging.

One of the greatest mysteries in physics

"The camera is stereo now," commented Lihong Wang. "We have one lens, but it functions as two halves that provide two views with an offset. Two channels mimic our eyes."

In trials, the SP-CUP platform allowed successful three-dimensional ultrafast imaging of the linear polarization properties of a single ultrashort laser pulse, propagating in a scattering medium.

Lihong Wang commented that the breakthrough may help researchers better understand the physics of sonoluminescence, a phenomenon in which sound waves create tiny bubbles in water or other liquids. As the bubbles rapidly collapse after their formation, they emit a burst of light.

"Some people consider this one of the greatest mysteries in physics," noted Wang "When a bubble collapses, its interior reaches such a high temperature that it generates light. The process that makes this happen is very mysterious because it all happens so fast, and we're wondering if our camera can help us figure it out."