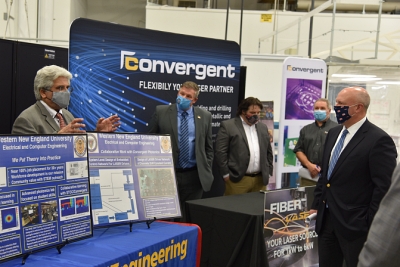 AIM Photonics is supporting a fourth center dedicated to photonics application development and training in Massachusetts, with a $2.6 million grant for a laboratory hosted by laser firm Convergent Photonics.

Awarded via the Massachusetts Manufacturing Innovation Initiative (M2I2), the support involves an academic partner in the form of Western New England University (WNE).

Officially described as a “Lab for Education and Application Prototyping” (LEAP) facility, the center will focus on product development, training, and research in integrated photonics.

Training focus
In an October 20 announcement at Convergent’s Chicopee site, local politicians and legislative leaders met project teams from WNE and Convergent that stand to benefit from activities at the new facility.

According to a release from the Massachusetts Technology Collaborative (MassTech) organization, the teams highlighted how the M2I2 grant will be used, outlining the future installation of a high-power semiconductor laser laboratory.

It will also create a “state-of-the-art” education and training facility for students, teachers, and faculty from WNE, alongside the Springfield Technical Community College (STCC) and other Massachusetts institutions seeking training in optics and photonics technology.

“Our investments in advanced manufacturing are targeting immediate projects, such as the response to Covid-19, but also longer-term projects like the new LEAP here in Chicopee.

“This partnership between a growing company like Convergent and a tech-oriented university like Western New England, will create the opportunity to build on that foundation and will take ongoing collaboration and training in this sector and across this region to the next level.”

Convergent, which sells a variety of high-power laser sources aimed at materials processing applications, can trace its origins back nearly 60 years, shortly after the very first laser was demonstrated.

Having initially focused on carbon dioxide sources, it subsequently developed high-power Nd:YAG and fiber lasers, and is a subsidiary of Italy’s Prima Industrie.

New diodes
As well as the training aspect, the new LEAP facility is expected to help Convergent develop a new generation of high-power diodes for use in medical laser systems, and fiber lasers for delivering optical power in data centers.

Paolo Sanna, the president of Convergent Photonics, remarked: “We are very glad and proud to be part of the LEAP initiative, which will reinforce the historical presence of Convergent Photonics in western Massachusetts and foster the development of a new generation of engineers in integrated photonics - one of the most important key enabling technologies the 21st century.”

WNE president Robert Johnson added that the collaboration would aim to build a collaborative learning environment focused on training the next generation of highly skilled engineers.

“The LEAP facility will provide unique hands-on experiential learning that is the hallmark of a WNE education,” he said. “We look forward to strengthening our bonds with the western Massachusetts community as economic development continues to expand and provide opportunities for our students.”

Local capability
Carolyn Kirk, executive director at MassTech, claimed that the investments in the four LEAP centers would make the state one of the best for training and research and development in integrated photonics.

The three other projects include one at Massachusetts Institute of Technology, alongside a collaborative effort between Worcester Polytechnic Institute and Quinsigamond Community College, and a partnership involving Bridgewater State University and Stonehill College, all supported via M2I2 funding schemes.

Joseph Wagner, assistant majority leader in the House of Representatives, where he represents Chicopee, commented:

"This award will help advance the state's photonics capabilities, while expanding innovative opportunities in Chicopee and the greater region. The collaboration between Convergent Photonics and Springfield Technical Community College in their creation of a LEAP facility represents a testament of the state's ongoing commitment to western Massachusetts in advanced manufacturing.”

Mike Cumbo, who was appointed CEO of AIM Photonics in June, added: “These LEAP facilities are critical to our next generation workforce of skilled technicians, engineers, scientists and leaders in the growing field of integrated photonics, as well as ensuring our national security in manufacturing and defense-related supply chains.”