US researchers hope to have new sensors on silicon chips by flu season 2020; to test for Covid-19 and flu together and get results in minutes. 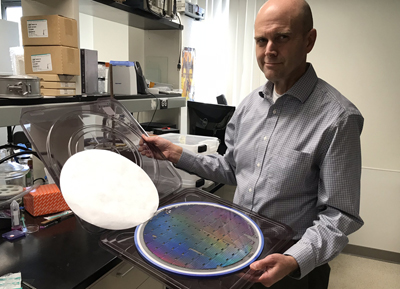 Ben Miller, a professor of biomedical engineering at University of Rochester, NY.

Eight weeks after it marched into the coronavirus battle, the American Institute for Manufacturing Integrated Photonics (AIM Photonics) has been putting together crucial new collaborations on testing by industry, the US Department of Defense (DoD), and research labs.

In this crisis, it helps that AIM’s photonics industry partners know product timelines, researchers say, and how to scale way up, to global scale.

“The advantage of AIM Photonics is we can talk about how to get to a million, or to ten million, tests,” said Ben Miller, a professor of dermatology and biomedical engineering at the University of Rochester Medical Center who works with the diagnostics firm Ortho Clinical Diagnostics, based in New Jersey. “The manufacturer can get beyond us, and map it out.”

Since March 12, partners at AIM Photonics, based in upstate New York, have been taking on the coronavirus at top speed, hoping to have new sensors on inexpensive silicon chips by flu season. They hope to handle Covid-19 and flu together, providing results in minutes, not hours or days. While initial commercial rollout will be to clinical laboratories, the goal is to one day have a “point of need” solution: “You’ll eventually be able to walk into a grocery story and get test answers in a few minutes,” said Frank Tolic, Chief Marketing Officer of AIM Photonics.

The initial results have been fast-tracked to the DoD, says AIM Photonics, which hopes products will soon be headed in the field. That focus began soon after the scope of Covid-19 was known. Now, some lab chiefs say they are conferring with industry counterparts on possible product chains several times a week. Goals include less expensive and more reproducible microfluidic devices.

With most lab staff members self-isolating, AIM Photonics has been expanding its optical design capabilities to allow more efficient interfacing. It’s found new ways to let labs run their experiments, then ship data to designers working at home to do analysis, for example on how to accelerate high throughput rates.

“This is a terrific opportunity to move on things we’ve been developing for decades as fundamental science, making one or two at a time with fairly slow technology,” said Ben Miller in Rochester. “Now we have an opportunity to prove we can do things very fast. And we can actually use them to improve people’s lives. AIM Photonics makes all that possible.”

During Covid-19, AIM Photonics, which was founded in 2015, has been regarded as a vital bridge between labs on campus and in industry and US Defense Department labs. For example, the sprawling Ortho Clinical Diagnostics, with 5,000-plus global employees, had been working on photonic sensor technology before the pandemic. 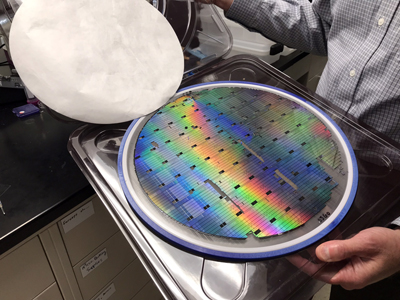 They partnered with Miller’s lab and AIM Photonics' sensors project to design and make photonic integrated chips, or PICs, to be used as disposable photonic sensors for speedy, more efficient testing and screening, initially in clinical laboratories and later in a pharmacy or a doctor’s office. The team is now doing tests on human samples, Miller said, “to make sure it works.”

It’s critical for the sensors to be able to rapidly spot the immunoglobulin G and the immunoglobulin M antibodies that humans develop within two days of exposure to the virus. “Ortho already had an IgG test in its platform,” Miller said, “so we are working together on that.”

Since 2017, Ortho had been working on an integrated photonics approach to standard blood tests, with AIM Photonics sensors project and Ben Miller’s lab. When COVID-19 hit, AIM Photonics and Miller’s lab of 16 people in Rochester, saw an opportunity to rapidly develop the integrated technology.

“Since then, other groups have joined in, including the engineering lab of Carl Meinhart at UC Santa Barbara,” Miller said.

“The main thing is, faster, better, cheaper,” Miller said. “We can put multiple tests on the same component, not just one marker for Covid-19. We can look at a lot more variables to describe someone’s immune status.” Miller’s sensor packages have been fast tracked to the Defense Department for approval.

In Albany, N.Y., Nathaniel Cady, who is the Empire Innovation Professor at SUNY Polytechnic Institute, also works with AIM Photonics partners on development of microfluidic devices and small chip-based biosensors.

AIM-based collaborations, Cady says, empower his lab to rapidly transition toward commercialization and manufacturing scale-up. “Working with partners like Ortho Clinical Diagnostics and Syntec Optics gives us the manufacturing and commercialization perspective needed to rapidly bring these technologies to market,” Cady said. “The New York State photonics ecosystem, including AIM Photonics, is key to fostering these partnerships and making this project a success.”

“I am excited to be on the cusp of delivering a rapid antibody test that could help our global efforts in the fight against Covid-19,” Cady added. Ben Miller added: “In a crisis, you find a way to fight back. And as scientists and engineers, this is how we fight back. It’s amazing. Who knew this would take over our lives?”

Ford Burkhart is a freelance writer based in Tucson, AZ.