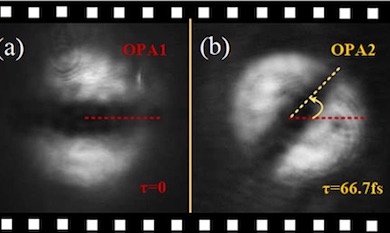 An all-optical imaging technique has demonstrated what its developers describe as an unprecedented frame rate, and could now help visualize ultrafast transient phenomena.

Researchers at Shenzhen University based their technique on optical parametric amplification (OPA), in which non-linear optical effects are harnessed to change the wavelength and frequency of light pulses within certain crystal materials.

Reporting the findings in Advanced Photonics, the Shenzhen project commented that OPA is an attractive candidate technology to overcome limitations in existing single-shot ultrafast optical imaging methods, including the challenge of single-shot femtosecond imaging with high spatiotemporal resolution and frame rate.

When OPAs are simultaneously irradiated with a specific signal light beam and a higher-frequency pump light beam, the signal beam is amplified, an operation accompanied by the generation of so-called idler photons whose energy represents the difference between pump and signal.

Applying this principle to optical imaging involves using laser photons arriving from a target object as the signal beam for a set of OPAs, with the arriving pulse length effectively creating sequential frames. The OPAs then generate spatially separated "idler images" from each one, images that can be recorded without the need for specific fast-response cameras. If the laser pulse is ultrashort, then the generation of idler images will be likewise rapid and resolution in OPA imaging will be correspondingly high.

The Shenzhen team incorporated this principle into a technique christened framing imaging based on noncollinear optical parametric amplification, or FINCOPA.

"This all-optical method is free from any bottleneck arising from active mechanical and electronic components for fast scanning or deflection, which is critical for high frame rates," noted the project in its published paper.

The project's FINCOPA platform used a set of four cascading OPAs, through which the signal beam passes in consecutive order. The idler signal from each was captured by a conventional CCD camera offset from the direction of travel of the main signal beam.

"Through a cascade of four OPAs with four associated CCD cameras and four different delay lines for the pump laser, the system can take four pictures in extremely quick succession," commented the Shenzhen team. "The temporal resolution depends on the duration of the laser pulses triggering the OPAs and generating the idler signals."

In trials using a laser-induced air plasma grating as the imaging target and a laser pulse width of 50 femtoseconds, FINCOPA experimentally recorded 50-femtosecond-resolved frame images, with an effective frame rate of 10 trillion fps.

Further refinements allowed the imaging of an ultrafast rotating optical field with an effective imaging rate of 15 trillion fps, thought to be a record shutter speed for high-spatial-resolution cameras.

Future work on the technique will now include improving the temporal resolution further by using shorter trigger pulses, and increasing the frame rate by using more powerful lasers.

The project will also investigate the practical application of FINCOPA to microscopic imaging, having already made a preliminary trial by using a conventional microscope objective for optical magnification of the signal from one OPA in the chain. The microstructure of the target was found to be clearly recorded.