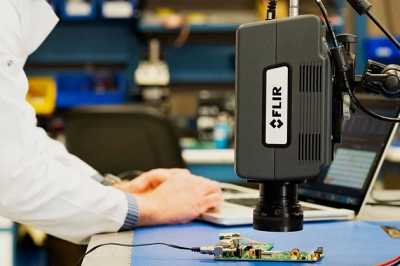 FLIR Systems has embarked on another restructuring effort, after deciding to discontinue a number of its consumer product lines and to sell its “Raymarine” electronics business for maritime applications.

Those moves were revealed by company CEO Jim Cannon as he announced the Arlington-headquartered firm’s latest financial results on February 27.

At $489 million, sales in the closing quarter of 2019 were up 9 per cent year-on-year - although that increase was entirely due to recent acquisitions including the likes of New England Optical Systems, Aeryon Labs, and Endeavor Robotics.

The latter two acquisitions contributed to a 23 per cent year-on-year jump for quarterly sales into government and military applications, which stood at $211 million.

“These actions to simplify and reshape the company’s product portfolio and organizational structure will support its efforts to focus on key strategic priorities, improve operational efficiencies, and position FLIR for long-term, sustainable growth,” stated the firm.

Describing 2020 as a “year of evolution” for the company, the CEO told an investor conference call that he had initiated a new cost-reduction and portfolio rationalization scheme called “Project Be Ready”.

US Army veteran Cannon, who introduced the concept of the “FLIR Method” shortly after taking the helm at the company back in 2017, added during the conference call:

“Project Be Ready aims to reduce costs and simplify our product portfolio to better align our resources with higher growth opportunities.” With regard to the Raymarine division, which is focused on maritime electronics rather than thermal imaging, Cannon said that FLIR was already engaged with several prospective buyers of the business.

ADAS and temperature screening
Alongside a growing focus on unmanned aerial vehicle sensing, FLIR is aiming to strengthen its position as a critical supplier of sensors for advanced driver assistance systems (ADAS) and future autonomous vehicles.

Cannon pointed to recent developments including a deal with major auto parts supplier Veoneer to provide thermal cores for “Level 4” autonomous vehicles, and thermal cameras for new robotaxis, as evidence of FLIR’s growing influence in the high-profile field.

“We expect ADAS-fueled technology such as thermal-augmented autonomous emergency braking to be integrated as a standard safety feature in the future,” added the CEO. “Key to our ADAS success is FLIR's more than 15 years of automotive experience - and the fact that we can claim the only automotive-qualified thermal sensor that's been deployed on over 700,000 vehicles today.”

Aside from that, FLIR also witnessed a boost in demand for its thermal imaging equipment for firefighting applications in Australia in late 2019, while more recently the outbreak of the Covid-19 virus has prompted a strong uptick in orders for screening body temperatures.

“We are proud that FLIR thermal imaging cameras are one of the tools being used in Asia as the first step to help indicate higher-than-average skin surface temperatures a key symptom of the coronavirus,” noted FLIR’s CFO Carole Lowe, while stressing that thermal imaging kit is not able to detect or diagnose an infection.

“We have sold cameras since the early 2000s for performing temperature screening relating to several widespread viruses such as SARS, avian bird flu, and others.” she added.

• Following the February 27 financial update, FLIR’s stock price slumped by around 20 per cent on the Nasdaq. Despite the coronavirus-related volatility currently afflicting Wall Street, the company’s valuation has remained steady since then, and after closing at just over $45 on March 3, the stock price translated to a market capitalization in the region of $5.5 billion.