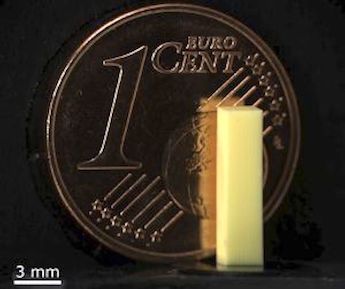 The rate at which these voxels can be individually 3D-printed is one key metric for the efficiency of the overall manufacturing operation. Another is the smallest size of voxel than a particular platform can achieve.

A project at Karlsruhe Institute of technology (KIT) has conducted a survey of existing additive manufacturing approaches, in order then to design a new platform capable of achieving faster deposition rates than those currently available. The work was published in Advanced Functional Materials.

The survey indicated the potential value of two-photon printing (2PP), in which the multiphoton absorption process effectively confines the excitation of the photo-sensitive material in all three dimensions at the same time. Sub-micron voxel sizes have been achieved using 2PP, but at widely varied printing rates.

One way to improve rates is to scan more than one laser focus at the same time, although this can reduce the power of each individual beam and put significant demands on the galvo-mirror scanning optics used by a multi-beam platform.

KIT has developed a platform intended to address these hurdles, by designing "a 2PP machine tool that goes beyond the described state-of-the-art concerning voxel printing rate, yet stays at the state-of-the-art regarding voxel size for 2PP," according to the team's paper.

"We apply this improved technology to a 3D mechanical metamaterial composed of an exceptionally large number of unit cells, which would not have been possible without this advance."

The KIT platform employs a femtosecond pulsed Ti:Sa laser emitting at 790 nanometers, along with a customized diffractive optical element for splitting the beam into nine beamlets.

It was applied to the processing of a "chiral mechanical metamaterial," a structure whose deformation under stress can be constrained in non-classical ways by careful design of a metamaterial cubic unit cell from which the structure is built. These chiral metamaterials are being considered for a number of novel design applications, and additive manufacture provides a potentially attractive manufacturing route.

To test both the speed and reliability of the setup, KIT printed a lattice structure 60 cubic millimeters in volume, containing structural details down to the micron-scale.

In a trial covering two days of total printing time, the platform achieved more than one hundred thousand 3D unit cells, composed of about three hundred billion voxels, according to the project team. Previously the largest values for such operations have been around five hundred 3D unit cells, printed with commercial technology using only one focus in about one day, which is more than one hundred times slower.

Future work at KIT could involve extending the approach to include more laser foci and hence larger peak 3D printing rates, although a denser foci spacing within the available field-of-view of the system's optics will require ways to prevent optical coherence between the foci. It will also in practice require feed materials with lower polymerization energy thresholds, since increasing the laser power substantially for multiple beams in the current architecture is not feasible.

But the current study is already a valuable step towards 3D printing of metamaterials at commercially useful rates, according to KIT.

"We have by far outperformed the record reached by 3D-printed aircraft wings, commented Martin Wegener of KIT. "This is a new world record."