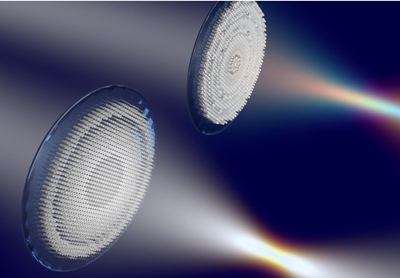 A commercial market for advanced components based on metamaterial structures barely exists right now, but that will all change over the next decade, say analysts at consultancy Lux Research.

According to Anthony Vicari and colleagues, whose Metamaterials Market Forecast is available now, demand from 5G wireless networks will stimulate rapid growth over the next five years or so, before the applications base widens along with the proliferation of autonomous technologies, where metamaterial sensing devices should find several niches.

“Metamaterials enable electromagnetic and acoustic performance characteristics that no conventional design can match, and are finally becoming practical to manufacture and use," said Vicari, who predicts a market worth $10.7 billion by 2030.

Repeating patterns
Under development for nearly two decades following pioneering work by Sir John Pendry and colleagues at Imperial College, London, metamaterial devices typically feature small but precisely repeating patterns of metal-polymer composites, designed in such a way that their acoustic and electromagnetic properties differ dramatically from that of the bulk material.

Those properties can be enhanced to such an extent that exotic absorption, “superlens”, negative refractive index, and electromagnetic cloaking effects are possible, although extending those effects from the microwave and radio spectrum into the visible realm is a major challenge.

To manipulate light and sound, the metamaterial patterns tend to require features about an order of magnitude smaller than that of the wavelength being manipulated – but with advanced lithography and materials processing techniques, these patterns are becoming easier and cheaper to produce.

One team at the forefront of the work is Federico Capasso’s Harvard University research group, which has created extremely thin, flat lenses based on metasurfaces that show extraordinary focusing power.

5G rollout critical
Lux analyst Vicari predicts that the performance advantages of metamaterials will prove especially valuable in communications antennas, along with radar and lidar sensors.

He said: “With the imminent roll-out in 5G network infrastructure and devices, and the subsequent projected growth in connected and autonomous vehicles, metamaterials are becoming viable at just the right time to see rapid growth in these new markets.”

The Lux report highlights that the startup landscape in metamaterials has grown rapidly in recent years - one example of that is the Capasso group’s “Metalenz” venture – and also points out that the expiration of key patents covering antenna designs over the next few years should prompt another uptick in commercial activity.

“At that point, we expect to see a rapid increase in the number of companies developing metamaterials, like the explosion of activity 3D printing experienced after early patents expired between 2005 and 2008,” states the Lux report.

Vicari is expecting the roll-out of 5G network infrastructure to provide the initial impetus for the nascent market in metamaterial antenna applications, with the sector growing rapidly from a standing start to a value of more than $4 billion by 2023.

Then, just as the 5G “push” levels off, he predicts that devices will begin to find applications in radar and lidar, where they will help to shrink the size and cost of sensors in self-driving cars as that market starts to become significant.

“Metamaterials provide significant near-term opportunity for differentiation among device makers,” writes the analyst in an executive summary of the report, warning that they also create a “strong medium-term risk of disruption” for both device makers and materials companies that fail to understand their potential impact.

Key players emerging
Vicari also points out that, although the very first commercial metamaterial devices – also aimed at wireless antennas – hit the market back in 2009, up until recently the technical challenge of manufacturing them meant they were too expensive for most applications.

“In the past few years, design and manufacturing methods have matured due to advances in modeling and simulation software, additive manufacturing, and lithography, making near-term at-scale metamaterial adoption feasible in several large applications,” notes the analyst.

“Optical metamaterials, controlling shorter wavelengths of electromagnetic radiation, require fine patterning through lithography and are much more expensive to produce than radio and microwave metamaterials – but still much less expensive than even a few years ago.” 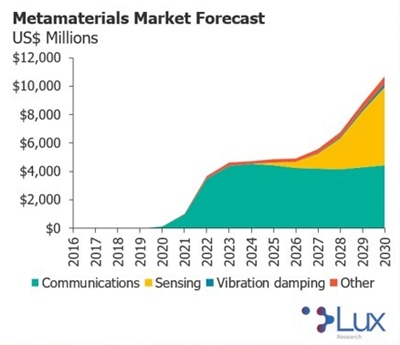 In contrast, metamaterial devices for radio and acoustic wavelengths can now be produced using standard PCB production techniques, and even by 3D printing.

Canadian company Metamaterial Technologies is already working on the laser protection application, and has partnered with both Lockheed Martin Canada and Airbus to develop protective solutions for airplane pilots.

Other companies identified by Vicari as key players in the emerging field include US-based Kymeta, which has developed a flat-panel satellite antenna, and UK firm TeraView, the Toshiba-backed Cambridge University spin-out.