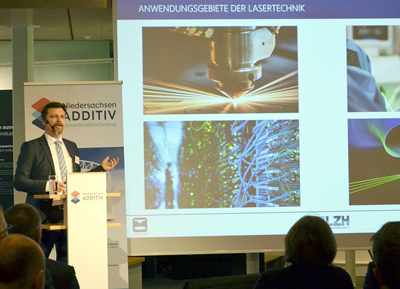 At a meeting last week in Hannover, Germany, a multi-discipline research group presented some of its main objectives based on the latest applications of 3D-printed optics – including the possibility of printing entire laser systems.

The four partners in the GROTESK innovation network, which stands for "Generative Production of Optical, Thermal and Structural Components", presented research approaches with which optical systems could be manufactured in completely different ways in the future.

"The partners of the GROTESK project described which applications could arise from this exciting field of research," commented Dr.-Ing. Stefan Kaierle, project manager of Niedersachsen Additiv and Executive Director at the LZH as he addressed the gathering. Deputy project manager, Dr.-Ing. Gerrit Hohenhoff, introduced Niedersachsen Additiv, which offers a wide range of activities in addition to research, development and consulting for small and medium-sized enterprises.

"Innovation happens in our heads and I am delighted to see many younger attendees," commented the coordinator of the consortium, Prof. Dr.-Ing. Roland Lachmayer (of LUH). He said, "GROTESK is researching how optical systems can be digitally constructed and converted into real assemblies by additive manufacturing."

The researchers explained that they can already print internal structures for improved cooling of a laser. With a digital twin, the team at the LUH simulates the thermomechanical properties of a 3D component and can thus model the manufacturing process in advance. More efficient cooling systems enable higher output powers without thermal losses, which is a prerequisite for more powerful laser systems. 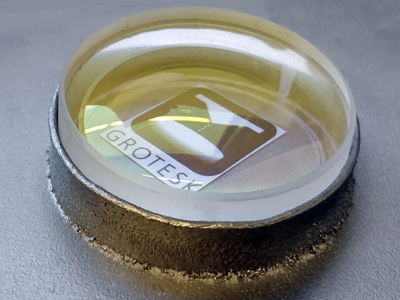 GROTESK aiming to make lasers and optics by additive manufacturing.

"We have to choose materials wisely and adjust properties such as the melting point and the surface properties," said Prof. Dr.-Ing. Volker Wesling (of CZM). The CZM attaches particular importance to both the connection during the direct printing of a material on an optical component and to the resulting thermal influences. The high thermal load in this process can lead to increased tensions, which sometimes lead to the breakage of the optics. However, this can be prevented with adapted material systems.

Optical systems often consist of different types of materials. "We print metal, glass and polymers and would like to be able to change the materials with little effort," said Prof. Dr.-Ing. Henning Ahlers (of HsH), defining the challenge to the system technology. His solution is a coaxial laser deposition welding head that splits the laser beam and then later recombines it. In this way, a component can be processed independently of the beam direction, and different materials can be fed in flexibly and automatically.

"We are still a long way from automated laser production," said Dr. Dietmar Kracht from the LZH. "But the concepts presented at the GROTESK meeting make a major contribution to our ability to automate many systems in the future." The LZH team can already directly print optics into a medium in a tension-free way. This process can be automated, he continued, saving a manual step in laser assembly. "In the future, GROTESK intends to digitally construct and print entire laser systems."