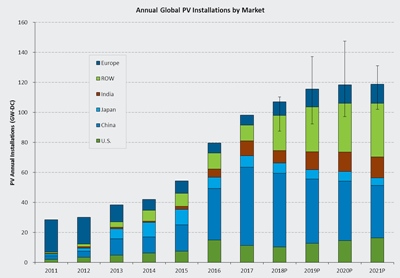 Global deployment of photovoltaics for electricity generation is growing faster than previously expected, and set to reach the terawatt level within just five years.

That was one of the conclusions from a recent meeting in Golden, Colorado, that was attended by PV specialists from the US National Renewable Energy Laboratory (NREL), the Fraunhofer Institute for Solar Energy Systems (ISE) in Germany, and Japan’s Advanced Industrial Science and Technology (AIST) organization.

According to recent figures from analysts at Bloomberg New Energy Finance (BNEF), by the end of last year cumulative PV deployments had reached around 400 GW. That represents a huge recent rise - just two years ago the total stood at 230 GW.

And with around 100 GW expected to be added to global grids this year - thanks in large part to strong momentum in China and India - the installed capacity continues to rise fast.

Following the “2nd Terawatt Meeting of the Global Alliance of Solar Energy Research Institutes (GA-SERI)” in Colorado, NREL said that analyst projections from BNEF, as well as the likes of Deutsche Bank, Goldman Sachs, and Greentech Media Research, suggested that another 460 GW would be added between 2018 and 2021.

If correct, that would take the total to nearly 900 GW by the start of 2022, and set to exceed the terawatt level by the end of 2023. For comparison, total electricity generating capacity in the US currently stands at just over one terawatt, of which just under 4 per cent is provided by PV. However, because of the intermittency and seasonality of solar power, PV currently accounts for slightly less than 2 per cent of actual electricity generated.

Terawatt goal
Fraunhofer ISE director Andreas Bett commented: “Significantly more PV has been installed in the past few years worldwide than we had anticipated. Most of the experts who gathered at the GA-SERI meeting predict that the terawatt goal will be reached by the end of 2023 or even sooner.”

The figures are largely comparable with earlier findings by the Solar Power Europe organization, which reported in March that global installations in 2017 had jumped nearly 30 per cent on the previous year, to around 99 GW.

At the time, its chief analyst Michael Schmela said of those figures: “After an astonishing 50 per cent growth in 2016, many solar experts did not expect any growth in 2017. The fact that we saw solar continue to grow at such a high rate despite these analyses proves that solar has been constantly underestimated. The solar revolution is unstoppable and happening much faster than anticipated.”

All of the analysts agree that China and India – but particularly China – are largely responsible for the current market impetus.

PV deployments in China in 2017 represented some 53 per cent of the global total, while just shy of 10 GW of new capacity is thought to have been added in India.

And although the US added significantly less PV capacity to the grid in 2017 than it did in 2016, deployments of around 11 GW still represented a level of activity 40 per cent higher than in 2015.

According to figures attributed by NREL analysts to the China Electric Council, 2017 was the first year that wind and solar contributed more than half of all new electricity generating capacity in the country.

BNEF attributes that expansion, which appears to have continued in the opening quarter of 2018, to a sudden increase in the “quota allocation” for PV mandated by the Chinese government last summer. 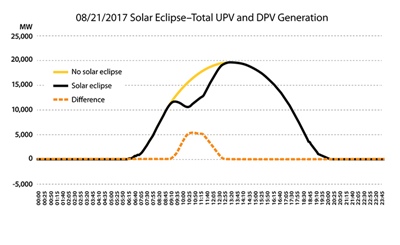 After gathering data from sites across North America, the NREL team explained: “Utility-scale solar plants, not including concentrated solar power plants, have the capacity to generate 15.8 GW of electricity and rooftop solar can provide an additional 9.2 GW.

“On a typical day, utility-scale facilities generate more than 12 GW. During the eclipse, however, the panels lost an estimated 4 GW of production. Rooftop solar, which typically produces about 8 GW, lost 1.9 GW during the eclipse.”

Co-author Santosh Veda reported that this kind of analysis would become increasingly important as the deployment of PV grows, and the technology’s overall contribution to electricity generation becomes far more significant.

“The focus of this study is to develop the framework and the tools for understanding the impact of a wide-area phenomena like a storm, or even another eclipse, on PV output and grid reliability,” said the NREL research engineer.